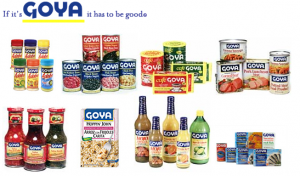 Goya Foods, the leading Hispanic-owned food company in the United States, today announced the donation of 75,000 pounds of food to 10 local New York City food pantries, in collaboration with United Way of New York City. Taking place on the 75th day of Goya’s 75th year, the donation fortifies their larger mission to fight hunger and food insecurity among the communities they serve.

Volunteers, staff and clients of the food pantries, along with Goya and United Way representatives, gathered together at the West Side Campaign Against Hunger to celebrate with a cook-off by three Customer Chefs, who prepared and provided tips on healthy and affordable Goya-inspired dishes. Carey Yorio, a 4th generation member of the Goya family, judged the cook-off and invited the audience to assist her in determining the winning dish.

“Nearly one in five Americans lacked the money to buy the food they needed last year,” said Gordon Campbell, President and CEO of United Way of New York City. “Due to the scarcity of healthy options in low-income neighborhoods, obesity, diabetes and other diet-related diseases are on the rise. In the South Bronx, almost one in three people are regularly unable to afford a meal. These are some of the most severe hunger problems in the entire country. We want to increase access to not just affordable food, but healthy, nutritious food, for all New Yorkers.”

“Due to the recession, the problem of hunger in New York City has grown significantly,” said Doreen Wohl, Executive Director of the West Side Campaign Against Hunger. “Last year, about 1.4 million New York City residents struggled to afford enough food. It is critical that we provide nutritious options to people who really need it. This donation is a tremendous gesture and feeds a lot of people.”

“Goya has an extensive history of donating food on a local and national level,” said Carey Yorio, 4th generation Goya family member and Research & Development Associate at the family-run Goya Foods. “We have provided aid to disaster recovery efforts around the world, including Haiti and Chile. Last year, Goya donated more than 1.5 million pounds of food in the United States. This contribution is a generous and remarkable move in a healthier direction.”

The donation is a part of Goya’s larger contribution of one million pounds of food across the United States and Puerto Rico. The donation of rice, dry beans and other Goya favorites will feed three million people, and is the largest ever single day contribution by a food company. In addition, as part of their commitment to aiding victims of natural disasters, Goya announced today that the company will donate 100,000 cans of Goya coconut water to help deliver nutrients quickly to the victims in Japan.

Goya Foods, in partnership with United Way, also launched the Goya Gives campaign, which encourages consumers to participate in the fight against hunger and promote better nutrition though various Goya Gives social media platforms. For 75 days, from March 16th to May 29th, the public can contribute recipes, photos and stories of low-cost, nutritious meals with friends or neighbors in need. Participants can also share their Goya Gives status with their friends on Facebook and Twitter.  In addition, the public can make monetary donations to United Way to help fund the organization’s mission to prevent hunger and promote better nutrition in communities across America.