Clint Eastwood’s big screen version of the Tony Award-winning musical tells the story of the four young men from the wrong side of the tracks in New Jersey who came together to form the iconic `60s rock group The Four Seasons. Their trials and triumphs are accompanied by the hit songs that influenced a generation, and are now being embraced by a new generation of fans through the stage musical.

Enter for the chance to win a t-shirt, tote bag, 3” button, movies passes and more on behalf of the film by watching the trailer and answering the following movie question:

Jersey Boys tells the story of four young men from the wrong side of the tracks in New Jersey who joined together to form a 1960s rock group. Name this iconic group. 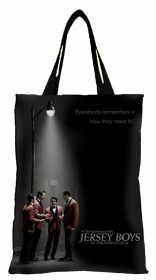 The release of CANTINFLAS on August 29th!
Grilled Chicken with Cherry Chipotle BBQ Sauce Recipe
Translate »
%d bloggers like this: