Many know about the drug wars going on in Mexico, and how it’s crossing the border into states such as New Mexico and California. But what many may not know is that many drug traffickers – believe that 19th century folk hero, Jesús Malverde is the “patron saint” of drug trafficking to them. It’s believed that if a cartel member keeps a Malverde prayer card with them at all times, or a small statue/altar of him in the home, it would protect them from enemy cartels and law enforcement…even from death!

As this trend is crossing over, and so closely related to narcotics cases, US prosecutors are using Malverde items, such as prayer cards and candles, as evidence, according to the New York Daily News.  Have the NYPD narcotics taking it as evidence? Not yet. 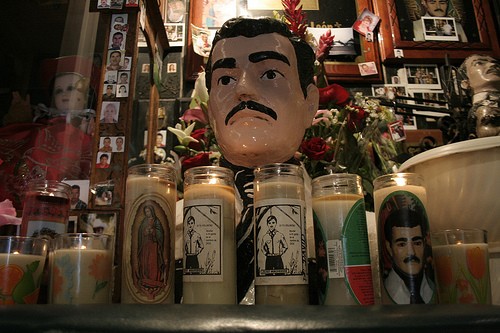 And, yes, this icon has taken popularity within Mexican communities in NYC, visible in botanicas, with owners stocking their shelves with prayer cards, candles, and statues that stand up to two feet tall. While the Catholic Church doesn’t accept Malverde as a saint, the store owners see how the people have. Other than being popular among locals, Malverde has been mentioned in TV shows, movies, books and countless stories and articles.

But what’s the legend behind icon? Jesús Malverde is originally from the Mexican state of Sinaloa, located on the western coast of Mexico, and was known as an “El Rey de Sinaloa”, “angel of the poor”, “generous bandit”, amongst others. To the locals of Sinaloa, he’s earned a Robin Hood-type image. He was executed for his crimes by authorities May 3rd 1909.

The CIA’s Latino Hunt…Why They’re Coming For You!

Law Enforcement Double Standard Demonstrated in Lack of Force & Arrest Against Capitol Hill Protestors
Americans flock to Latin America to live an upper-class lifestyle on $1,500 a month
Translate »
%d bloggers like this: