This successful Actor, TV host and heartthrob didn’t hold anything back inside his memoir.

“I feel like you need to be completely honest, and unfiltered and put it all out there, and I did,” Lopez said. 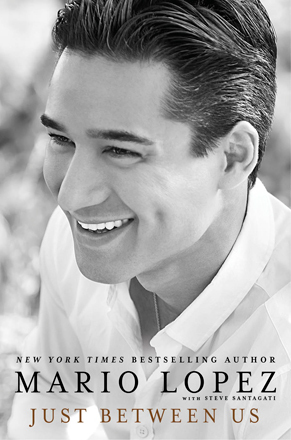 In the book Mario shared that he lost his virginity at age 12 and confessed that sex was always his “drug of choice“.

The 40 year old is now the proud parent of two gorgeous children, 4 year old daughter Gia Francesca and 1 year old son Dominic. However at age 15 he had a girl pregnant and was ready to step to the plate but the girl choose to have an abortion.

He also speaks on being a child of Mexican immigrants and how growing up in Chula Vista, California shaped his life.

He is now happily married to Courtney Mazza. But he wrote about his first marriage in 2004 to model Ali Landry which lasted only 2 weeks and was quickly annulled. He was open and shared he cheated on his wife-to-be during a wild bachelor party weekend in Mexico.

“I had never addressed certain relationships, especially the truth and the handling of what happened in my first marriage,” he wrote in Just Between Us, via Yahoo. “I got inebriated and a little too friendly with a young lady. When it was time to return home, lightning hit me with the truth: I wasn’t in love. But I walked down the aisle [anyway].”

I am excited to read this one are you?