@Katedelcastillo PUSHES THE ENVELOPE IN K-11

@Katedelcastillo PUSHES THE ENVELOPE IN K-11 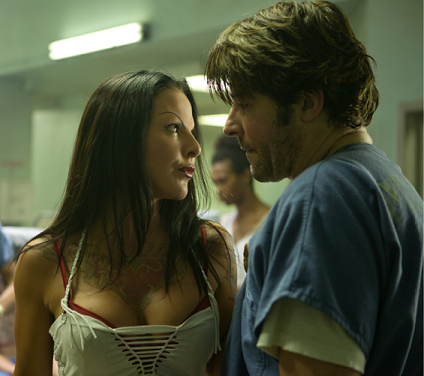 Kate del Castillo has done it. She has found a character that is equally admirable and frightening. The film is called K-11. The role of Mousey, a transsexual, was quite a coup and a challenge for Kate, who was excited to be considered for this role. “I got the offer of a lifetime. I always wanted to be out there. This for me is so much fun. I liked it and I wanted it to be out there.”

Kate was selected by Jules Stewart, mother of Kirsten, from the Twilight movies. Jules met Kate and fell in love with her. She saw that she could be the one who could pull this off. “I got the offer which normally would have been done by a man. Kate explains. “I was very lucky to be honest. I read it. It’s awesome, but where do I fit?”

She rewarded her director’s instincts by plunging into serious research for the role, along with heavy preparation which included a make-up job that presented straight black pencil eyebrows and heavy makeup. With her trademark dark, raven hair, Kate was transformed into something different, darker. Kate says why, “I like strong characters and Mousey is scary, freaky, she has a duality that you either feel sorry for her or hate her.”

Kate left the experience with a better understanding of transsexuals. Often feeling insecure before roles, Kate took this role as a risk. She wanted to do it right. “There’s a fine line between being cartoonish and a real person. I was pretty ignorant about the transgender thing. For me I dived into the internet buying books, learning as much as I could.”

A major help came in the form of actress Felicity Huffman, who played a transsexual woman in the film Transamerica not only helped with the voice but in understanding many subtle aspects as well. “Felicity was so much help. She opened so much to me. She is a treasure, revealing in many ways.

The movie is about a prisoner played by Goran Visnjic, who is hauled into a prison unit called K-11 where gay and transsexuals are imprisoned. Kate’s character “Mousey” is the alpha male? “It was pretty intense. It was done in a real jail that was empty, no longer in use.” Kate says. “Goran was amazing. We were so into it.”