When you look at Claudia Ochoa Felix you may think ‘wow, she kinda looks like the Latina version of Kim Kardashian’ and you wouldn’t be alone in that thought. However, when you look at Ochoa Fox would you ever think that she could be the leader of an elite murdering squad used regularly by a Mexican drug cartel?

If you said no, well you’re not alone in that thought either.

With long sleek brown hair, intense eyes, and a curvy body, Ochoa Fox has become somewhat of a media sensation. Apart from being described as the doppelganger of Kim Kardashian, Ochoa Fox recent popularity stems from allegations that she is the new ruler of a known Mexican killing squad known as, Los Ántrax .

Reports have been circulating that Ochoa Fox, aged 27 and mother of three, is now the leader of Los Ántrax which has been reported as being under the employ of the Sinaloa Cartel, a coldblooded drug cartel, in Mexico to do their murderous bidding.

Listed as one of Mexico’s most powerful drug-trafficking organizations in the world, by the U.S. authorities, The Sinaloa Cartel has protected and have hired members of the killer squad Los Ántrax to carry out their assignments and to ensure their reign remains.

Allegedly, Ochoa Fox—also known as La Emperatriz—acquired the leadership of Los Ántrax after her well-known hit-man boyfriend, Jose Rodrigo Arechiga Gamboa was arrested and taken to prison. After Gamboa’s arrest, Ochoa Fox is said to have taken over Los Ántrax despite the Latina vehement denial that she has any affiliation to the cartel. 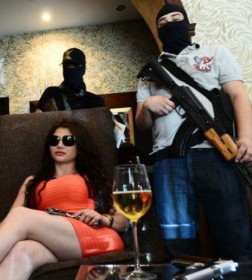 Despite making claims that she and Gamboa are nothing more than friends, Ochoa Fox’s word has been questioned due to an incident and photos of the Latina.

On her social media accounts, particularly Instagram, Ochoa Fox there are photos of Ochoa Fox posed in ways similar to Kardashian while wielding AKA-47 that has been personalized colored pink. Also, on such sites Ochoa Fox has posted updates discussing her luxurious yet reportedly dangerous lifestyle.

But sites like Facebook and apps like Instagram aren’t the only things linking Ochoa Fox to being the new leader of Los Ántrax. Another reason as to why Ochoa Fox may be connected to Los Ántrax is due to a murder-gone-wrong incident.

Recently, there was an alleged hit made on Ochoa Fox’s life when gunmen grabbed a young woman who looked similar to Ochoa Fox. The young woman hooded gunmen snatched was named, Yuriana Castillo.The woman’s body was later found behind a school body; she had been tortured before her death.

But for Ochoa Fox the claims regarding her link to Gamboa and reports that she is the new leader of Los Ántrax is simply false.

According to Ríodoce, a Mexican newspaper that focuses on the Drug War in Sinaloa, Mexico and based in Sinola’s city of Culiacán, a press conference was held by Ochoa Fox and her attorney in response to the recent attention she has received in the media.

During the press conference, Ochoa Fox and her lawyer stated that Ochoa Fox’s Facebook, Twitter, and Instagram accounts had been cloned and were being used to defame her.

According to Ochoa Fox, the photos in questions are a discredit to her life since she does not live a life of luxury and does not have armed men surrounding her; the latter statement refers to a photo of Ochoa Fox posed in a chair surrounded by hooded men wearing bulletproof vests. Also, Ochoa Fox has stated that many photos on the cloned accounts are not photos of hers at all.

Now, in the matter of Yuriana Castillo there are reports that Castillo, much like Ochoa Fox, was a close associate of Gamboa. But the true nature of their relationship is yet unknown.

Whether Ochoa Fox is the new leader of Los Ántrax or merely an innocent Instagram users who likes talking selfies with guns, time will tell since it seems like Ochoa Fox will not be going anywhere any time soon much like her overnight sensation counterpart Kim Kardashian.