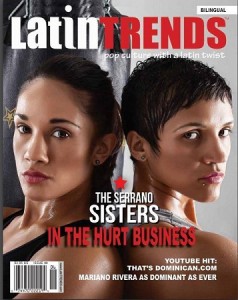 Television has probably become the second most popular media that people use next to the Internet and after that, comes film, and print media. Naturally, people will like one media over the other and choose that one as their main source for their news about the world.

Speaking of television, LatinTRENDS is going to be featured on the 30 minute PBS Series “Latino Americans” which is premiering on September 17, 2013. Readers of both the online and print edition of the magazine should watch the show. The series will be featuring the June issue of the magazine with front cover of the famous boxing sisters, the Serranos.

Also, “Latino Americans of NY and NJ,” is to air on WNET stations Thirteen, WLIW21, and NJTV between September 17 and October 11, 2013. More information about the Latino Americans of NY/NJ. This series will talk about the lives, achievements, culture and rich diversity of local communities in New York and New Jersey.