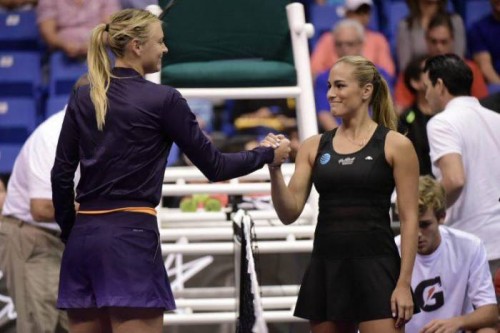 They were two tennis players going in opposite directions in 2016. Maria Sharapova, the best paid women’s athlete in this decade but banned from the sport in March for failing a doping test. Monica Puig, the Puerto-Rican woman who fought a slow battle to join the elite but superceding her previous efforts with a gold-medal winning performance at the 2016 Rio Olympics, the first woman from the island to win such an honor.

Now, recently in a spirit of goodwill which represents the idea of the holidays, Monica played Maria Sharapova in her own tournament last week, the Monica Puig Invitational in San Juan after Sharapova’s sentence was reduced. Sharapova was pleased to be coming to Puerto Rico for the first time to help open the festivities.

“Monica’s Olympic story brought so much joy and pride to the people of Puerto Rico and I am happy to support her dream of playing tennis in her homeland.”

It turned out to be quite a classic with Puig and Sharapova splitting the first two sets until Puig won a tough final set 10-6 in front of 12,000 adoring fans. Sharapova responded to the love she received.

“Maybe when I come back in 10 years and retire, we’ll need a bigger stadium,”

Sharapova was impressed by the event and credited Monica expressing that together they accomplished something lasting through the sport in Puerto Rico. This event was a nice positive for Puerto Ricans who have been dominated by financial troubles throughout this year and Monica is determined to do her part in bringing something new to the table.

“I am very fortunate to be in the position that I am — both in life and as an athlete,” she said. “I want to bring tennis to Puerto Rico, help grow the sport, and have people enjoy and take pleasure out of this great sport and also for the next generation to be able to learn to play tennis, and use it as a tool to be successful in life.”