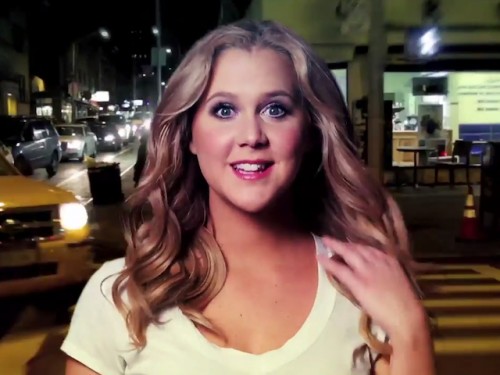 Comedian Amy Schumer is currently on an upstream of Hollywood recognition.

From a highly successful comedy sketch show on Comedy Central, to hosting last summer’s MTV Movie Awards, being named one of TIME magazine’s 100 most influential people this year, and currently starring in Trainwreck—a movie in-which she also wrote, Schumer is a comedian known for taking on controversial topics that deals with feminist issues like equal pay, rape culture and the portrayal of women in media. But now the comedian is facing public scrutiny after being criticized for her stand-up routines exhibiting racial insensitivity. Particularly, her comments regarding the Latino community have some suggesting the star is racist.

However, should the routine of a comedian ultimately classify them as a racist if it contains certain jokes that may be considered so?

According to Schumer, no.

An article written by the Guardian about the Comedy Central star’s stand-up comedy containing some questionable jokes. The article identified the comedian as having a large “Blind Spot” when it comes to jokes that are aimed at various race groups.

Of the jokes told by Schumer the article addressed several jokes that regarded Latinos.

“I used to date Latino guys, now I prefer consensual,” Is a joke allegedly told by Schumer during one of her stand-up routines.

And in a somewhat response to the article and accusations of her being racially insensitive, Schumer took to her Twitter account and posted an essay to defend her material and confirming that she is not a racist.

“It is a joke and it is funny. I know that because people laugh at it,” said Schumer in her tweeted response, “Trust me. I am not a racist.”

Schumer then ended her Twitter post with a plea that those calling her a racist spend more time actually targeting true race issues as opposed to her material.

“My fight is for all people to be treated equally,” Schumer wrote. “Move on to the next person who is more deserving of your scrutiny.”

So should comedians avoid such hot button issues such as race due to some finding it offensive?

Jokes are jokes and remain as so when it is known that they are simply that. You can laugh at a joke that may be ascribed to a particular gender, race, or sexual orientation if you know that joke is simply a joke. As long as you understand that there is something wrong with it; that essentially the very joke is “messed up” or “shocking” then it is accepted as being just a joke. However, a joke becomes an issue, a problem, when a joke that is or could be offensive is taken and accepted as fact or truth.

Race, Gender, Orientation jokes told by the likes of Chris Rock, George Lopez, Sarah Silverman, and Schumer herself aren’t told to exploit, harm, or condemn any particular group but to spotlight the absurdity that such viewpoints, such stereotypes, are accepted by certain individuals who think that way and are nothing more than ignorant.

For example, what differs Schumer from the likes of Donald Trump or Iggy Azaelia?

Trump has recently made some comments regarding Latinos and as such is deserving of the outcry he is receiving for them, and Aussie rapper Azaelia has been targeted for past remarks regarding Blacks, Latinos, and Asians she has made on her Twitter, but the former two comments differ from the ones made my Schumer because the former comments aims to either persecute or wrongfully mock a specific group while the latter’s comments aims to make fun of the absurdity of such comments believed by the likes of Trump. While Azaelia isn’t exactly innocent for her comments, the attention outcry she received for them should be saved for such persons-of-interest like Trump: individuals who are seeking public office positions within our government and can do actual harm if they believe such ignorant things.

But again, if such stand-up acts like Schumer do offend then you as an audience member have every right to not pay for or watch a comedian who may perform such offensive material.

The following is just a bit of what Schumer had to say on her Twitter:

“Put down your torches before reading this so you don’t catch on fire. I am a comic…I will joke about things you like and I will joke about things you aren’t comfortable with. And that’s OK. Stick with me and trust that I am joking. I go in and out of playing an irreverent idiot. That includes making dumb jokes about race. I enjoy playing the girl who time to time says the dumbest thing possible and playing with race is a thing we are not supposed to do, which is what makes it so fun for comics. You can call it a ‘blind spot for racism’ or ‘lazy’ but you’d be wrong. It is a joke and it is funny. I know that because people laugh at it. Even if you personally did not. I am not going to start joking about safe material. And don’t ask that of me. I love what I do and won’t let anyone take that away. I ask you to resist the urge to pick me apart. Trust me. I am not racist. I am a devout feminist and lover of all people. My fight is for all people to be treated equally. So move on to the next person who is more deserving of your scrutiny and not the girl in your corner. Sincerely Amy (a dirty half Jew).”