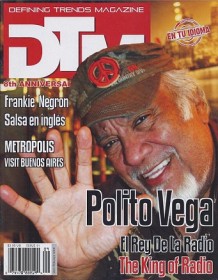 He was born in Ponce, Puerto Rico. He’s a frustrated singer. He seldom takes his cap off. He speaks loud and most of his fans recognize him by his voice. In his basement office in midtown Manhattan, he likes to talk about music – any kind of music, from salsa to reggaeton.

“Salsa is the genre that has giving me more satisfaction. I love Cha Cha Cha, Guajira and Changó, but the most beautiful of all is Son Montuno. Salsa is alive and it is going to be alive forever,” he said while talking over the cellular phone with friends and colleagues.

You’ve probably figured out who we’re referring to. He’s the same person that hosts a radio program on weekends about salsa (Saturdays and Sundays from noon to 8PM.) His name is Polito Vega and his charismatic smile has been the same all these years.

Polito Vega was born on August 3, 1938 and was raised in La Playa de Ponce before he came to New York in 1959. Radio is the only profession he has known. He’s been a commentator and was forced to work the night shift when he was learning to communicate to people via microphone from an isolated radio cabin. He also worked for Telemundo television for three years, hosting the show Club de la Juventud. Then he went back to radio.

His first show was Fiesta Time in 1960 on WEVD-AM radio station. “At that time I was afraid of speaking in front of a microphone, but I started gaining the approval of management and what is more important, getting accepted by the public,” said Polito Vega., while smiling and posing for some pictures. “I am tired of being interviewed and I don’t want to pose for any more photos.” 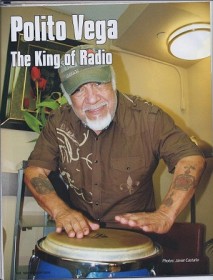 During the early 1960s the radio stations only played guitar music and some trios and boleros. Musicians like Machito, Felipe Rodriguez, Tito Rodriguez and Tito Puente were around, but no DJ played their music. It was Polito Vega who played the first salsa single, which was brought to him by Jerry Masucci, founder of Fania Records. The 45-rpm record was made by Johnny Pacheco and entitled ‘El Campeon.’ Then came Che Che Cole by Willie Colon and that was when salsa really started in the Big Apple. Polito Vega was there the whole time backing the music.

“If you want success in life, you have to study and prepare for changes. Leave the ego behind and treat people with decency and respect. I try no to offend anyone because I don’t want to go to bed with problems in my head,” said Polito Vega, who wants to be remembered as a happy person.

Retired? Polito Vega is not planning to take it easy any time soon. He said that he’s having a good time and he’s still full of energy. “Maybe I will retire in five years from now, but I am not sure it will happen that soon.”