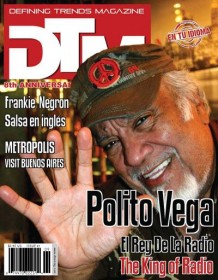 For the fourth consecutive year EL MEGATON MUNDIAL DE POLITO VEGA will be held in grand style in the World’s Most Famous Arena, Madison Square Garden. This coming Sunday September 21st, the greatest stars of Latin music will be reunited to honor and celebrate the career of The King of Radio, Polito Vega. This Mega Concert will bring together on one stage stars as Juan Luis Guerra, Juanes, Carlos Vives, Don Omar, Chayanne, Camila and many more.

The expectations and excitement from the public has been impressive and it is rumored that this concert is almost fully sold with prices ranging from $21.00 to $400.00 dollars.

In an exclusive interview LatinTRENDS, Polito expressed the satisfaction he feels about this event in his honor and the immense love he has received from his listeners in his 54-years career. The “King of radio” has been part of the musical history of the greatest figures and has helped launch the careers of old and new generations of artists.

This living legend of broadcasting has been in front of microphones since 1960, with its popular animation style and charisma. Throughout his career, he has received numerous awards from the hands of the community and city government entities. When we asked Polito, if he is considering retirement, he responds amid laughter, “yes, definitely. I’m almost hanging my boxing gloves”. He confirmed that he is considering the possibility and if a decision is made, he might announce it during the concert on Sunday.

Despite his 76 years of age, this giant of radio loves what he does and the interaction with the audience, he sadly admits that since the death of his wife and lifetime partner two years ago, he is not the same person anymore and he lost joy, but seeing his eyes sparkle and his excitement when he talks about his career and share all these wonderful anecdotes from the golden age of salsa, I daresay that we still have more of Polito Vega in radio for quite a while and as he always says he’ll stay “andando, andando, andando.”

THE EQUALIZER Premiere from the Toronto Film Festival
DON OMAR DETAINED IN PUERTO RICO
Translate »
%d bloggers like this: