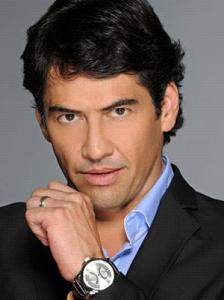 By Zuleyka Indarte
Gabriel Porras, who currently appears on Telemundo’s La Casa de al Lado as Gonzalo Ibañez, is reportedly cheating on his wife, Sonya Smith. Rumors that the actor was romancing one of the makeup artists on the set of the show allegedly reached Smith, causing tension in her marriage.
Smith and Porras met in 2005 on the set of Venevision Internation telenovela “Olvidarte Jamas”, in which they both starred as a couple madly in love. They secretly married three years later on February 29, 2008.
Although nothing has been confirmed or denied, Smith has reportedly taken it upon herself to investigate the allegations made about her husband. According to unnamed sources from the set of Porras’ telenovela, the actor has had a gloomy demeanor at work since the rumors of infidelity began to circulate.
The reports of the actor’s unfaithfulness have many fans wondering if they will put an end to his marriage.