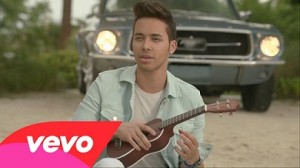 Prince Royce released the video for his song “Darte Un Beso” on Tuesday. The single “Darte Un Beso” is the first single from Royce’s third studio album. The track debuted at number two on Billboard’s “Hot Latin Songs” chart becoming the most successful debut artist, according to a statement from his representatives.

“Darte Un Beso” continues at #1 for a third consecutive week on Billboard’s “Latin Tropical Airplay” chart and is also #1 on the “Latin Streaming Songs” chart.

The video was filmed in Miami and was directed by Danny Hastings, who also directed Royce’s other two videos. Check out the video below.

To learn more about the popularity of bachata visit our featured article: The Threads That Bind Bachata to the Blues

Ricky Martin Will Perform For Brazil World Cup 2014
Lifetime’s ‘Devious Maids’ Gets Picked Up For Second Season
Translate »
%d bloggers like this: