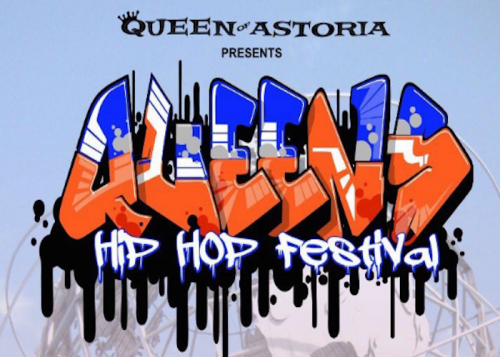 On Friday, Sept. 23 the inaugural Queens Hip Hop Festival will kick off at 10 p.m. at Flattops in Astoria.

The three-day event is the brainchild of entrepreneur and blogger Ashley Dean, 25, who goes by the name of Queen of Astoria, which is also the name of her events planning business.

As a big lover of all aspects of hip-hop and Queens artists such as A Tribe Called Quest, Nas, and Puerto Rican star Noreaga, also known as N.O.R. E., Dean felt that it was time for the borough to have a music fest that represents its cultural impact on the genre.

I don’t think there is an event that I know of that really just celebrates Queens [hip-hop]. There is obviously a Brooklyn hip-hop festival, but there is nothing to showcase the talent in Queens and that currently pay respects to the greats that came out of the borough,” says Dean.

For Dean, hip-hop is not just a bunch of songs that comes out the radio.its more than just the music,

“It’s more than just the music, it’s about community and predominantly what is affecting the urban community, whether it be music, what’s in the news … and it compasses art, film, and dance,” says Dean.

All of the artists at the Queens Hip Hop Festival and 95 percent of the businesses, which will have representation there, are from the borough.

“In general, there aren’t a lot of venues that showcase hip-hop, so I thought it was important to make a stand out of that,” said Dean.

“I want to add educational components for kids and adults, and a volunteer outreach portion as well. The main goal is to get it throughout the borough, not just in western Queens,” says Dean.

Dean also helps out monthly at the Pan Am homeless shelter in Elmhurst and works with the youth leadership program Road to Greatness in Sunnyside.

“The borough really need this. There isn’t a lot hip hop [venues] here or things to do for young people,” says Dean.

I just wanted to start something to celebrate all of the hip-hop that comes out of the borough and just the community of artists that have come out of Queens and the future of hip-hop.”

Now, thanks to the Queen of Astoria, there will be. Flattops is located at 33-06 Ditmars Blvd and will have music from DJ Rob Swift and feature an open cypher.

Sunday at the Museum of the Moving Image there will be a screening of Belly starting 3 p.m. at 36-01 35th Avenue. The Blvd. Brunch Closing Party at La Gloria, which is located at 86-11 Northern Blvd., Jackson Heights, will be where the fest come to an end.

For tickets go to www.queenshiphopfestival.com.

METRO CHAMBER ORCHESTRA OPENS SEASON WITH A LATINO PARTY
Want to take a Dump in a Gold Toilet?…Now you can
Translate »