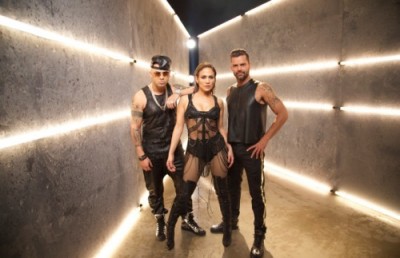 Puerto Rican Trio, Ricky Martin, Jennifer Lopez and Wisin recently teamed up for the reguetonero’s new song “Adrenalina,” and shot the official music video in Miami which was directed by Jessy Terrero.

In the video the queen of sexiness, J.LO was the center of attention, she looked sexy as she rocked various black outfits as she and the boys danced, sang and worked their butts of for this very energetic and sexy video.

Things really heated up especially between Ricky and J.Lo, in a scene together where Ricky can be seen seductively biting J.Lo’s ear as she is pushed up against wall by him inside a tunnel in what appears to be an abandoned warehouse that their party has taken over.

This is off of Wisin’s forthcoming album, El Regreso del Sobreviviente, which will be released on March 18th.

Nike﻿ Air Yeezy 2﻿ “Red October”
Waiting for Marriage, This is What Latino Star Shakira is Doing
Translate »
%d bloggers like this: