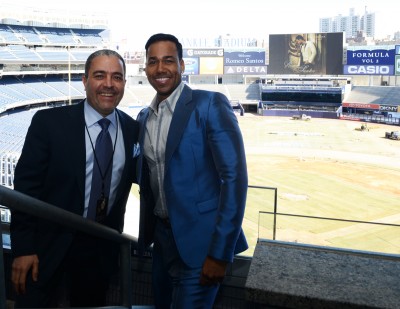 Bachata singer Romeo Santos launched this past Monday his new solo music production “Formula, Vol. 2” and announced that he will be at the legendary Yankee Stadium in the Bronx, New York, on July 12th, 2014 to offer a concert produced by businessman Félix Cabrera.

This concert in the Bronx “Is a dream coming true”, said Romeo in a press conference. Romeo was born in the Bronx and he is from Dominican and Puerto Rican ancestry.

Cabrera, who took Romeo to the Madison Square Garden and other venues in United States, will make history when this bachatero singer breaks his own record at Yankee Stadium with 50,000-seat capacity. “This is going to be a memorable concert to reaffirm that Romeo is one of the greatest Latino artists,” said Cabrera.

Artists such as Beyoncé, Eminem, Madonna and Paul McCartney have had solo shows at this stadium, but this will be the first Latino artist to perform alone at the Yankee Stadium. The Fania All Stars also performed at the old stadium in 1973 and it was later demolished.

“At the Yankee Stadium I’m going to represent not only my music, but the community as a whole and all Latinos,” said Romeo Santos in Spanish. “I feel proud of my people and my race”, added the singer when receiving a Yankee jersey with “July 12” written on its back, the date of the concert.

“I will sing songs from my new album “Formula, Vol. 2,” the previous one “Formula, Vol. 1” and from Aventura group,” said Romeo. “I will also have some friends s accompany me and make the concert even better.”

In this new album “Formula Vol. 2” Romeo teamed up with other singers such as Drake, Nicki Minaj, Marc Anthony and Kevin Hart. Bachatero Romeo Santos said that “Formula, Vol. 2” has other Latin rhythms and experiments with salsa music with the help of Marc Anthony, despite the fact that he loves salsa “with all my heart.”