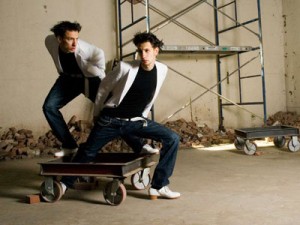 Pop-Locking its way into theaters on August 6, the movie Step Up 3D includes a diverse group of some of the world’s most talented dancers.
The cast is comprised of Latinos sharing their passion for dance, including Martin and Facundo Lombard, aka the Lombard twins. These guys are the real deal; born on 7/7/77 in Buenos Aires, Argentina, the Lombard Twins are world-renowned dancers, performers and dreamers.
Inspired by the moves of Michael Jackson, they started dancing at age 7. By 13 they made their TV debut in the Argentina’s most popular show, Rhythm of the Night.  As teenagers, their need of self-expression took them to explore different art forms besides dancing like, music, acting, writing and directing.
At the age of 20 the Lombard Twins accomplished one of their biggest dreams: they met James Brown during a concert in Buenos Aires. He called them on the stage to dance.  In awe of their talent, Mr. Brown dubbed them “The Soul Boys.” (The whole thing is on Youtube!) The rest of their path to the silver screen includes more encounters with James Brown, Tito Puente, Steven Meisel, Wyclef Jean and their inspiration, Michael Jackson.

I recently got to chat with Martin and Facundo Lombard about Step Up 3D. In a very special twin style, they answered for each other and just sometimes spoke in unison.

LeAura Luciano: How would you describe your dance style?

Lombard Twins: What we dance, we don’t call it hip-hop, we call it ‘Free Expression.’ There are no styles or rules, it’s all about emotions and feeling. All our movements comes from artist who inspired us as well as from our imagination and self expression. We do dance Hip-Hop in the film because is part of our characters background.
That’s why we would like you to watch the links. ‘Free Expression’ is not only the way we call our dancing but also our philosophy in art.

LL: What is the favorite place you have performed?

LT: We don’t have one. We really enjoyed all of them. From Lincoln Center to the little corner in New York City where we showed Michael Jackson one of our pieces.

LL: When you are not dancing what do you like to do?

LT: Other art forms that we use to express ourselves are acting, writing, directing and composing music. That’s what we do everyday.
Now if the question is what do we do besides art… well, we like to watch films and study them and also videographies, we like to listen to Astor Piazzolla and Classical music. Sometimes we read some books.
We were just reading Stella Adler’s “The Art Of Acting” and Michael Chekhov’s “On The Technique Of Acting” and Pedro Almodovar’s “Talk to Her.”

LL: You both are inspired by art, who are some of your favorite artists?

LL: What is your favorite music video of all time?

LT: Michael Jackson’s ‘Smooth Criminal’ as well as ‘Black or White’
and ‘Thriller’ are our favorite among others, but they are not music videos, they are short films, does that still count?

You can see Lombard Twins live performances at:

LeAura Luciano is currently the Fashion and Beauty Director of Urban Latino Magazine, and the founder of FreelanceMakeup.com. She is also a member of the ABA, the NY Bar Association, and the Hispanic National Bar Association.

Adriana Lima: Behind the Scenes of her NEW Photo Shoot!
VIDEO: Selena Gomez Does Silent Interview on Lopez Tonight!
Translate »