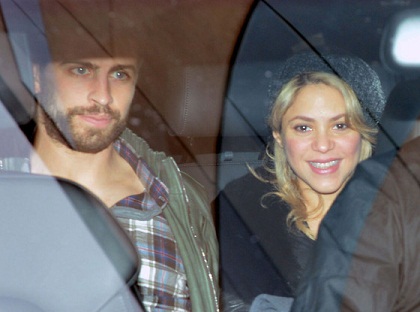 Colombian pop superstar Shakira and her Spanish footballer beau, Gerard Piqué, were all smiles on Sunday as they were seen by photographers leaving the Barcelona hospital where she gave birth to son Milan Piqué Mebarak. No images have been seen of the new bundle of joy but a day after Milan’s arrival, Pique posted a picture of the baby’s feet in miniature Nike sneakers with his name on them. The birth by caesarean section at Teknon Hospital in Barcelona was initially announced on the Shaki’s website last Tuesday, a few hours after she announced on Twitter that her birth was being induced. It said: “We are happy to announce the birth of Milan Piqué Mebarak, son of Shakira Mebarak and Gerard Piqué, born January 22nd at 9:36pm, in Barcelona, Spain .” “The name Milan (pronounced MEE-lahn), means dear, loving and gracious in Slavic; in Ancient Roman, eager and laborious; and in Sanskrit, unification…” We are all anxiously waiting to see what the newborn looks like. Looks like we will have to wait a little longer.