Superman Is An Immigrant

Superman Is An Immigrant 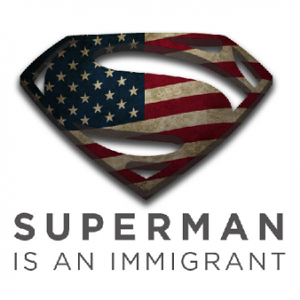 Coinciding with opening weekend of the anticipated “Man of Steel” film, Define American and the Harry Potter Alliance’s Imagine Better Network, today launched the “Superman Is An Immigrant” Campaign to harness the power of one of our most beloved modern mythologies and its energetic fan base. Born on Krypton, Superman, or Kal-El came to America with the promise of Hope – the symbol he bears on his chest. Many of our families also have a history of immigration. We share Superman’s hope and we continue his fight for truth, justice and the American Way.

The Superman Is An Immigrant Campaign at supermanisanimmigrant.com is inspired by Superman’s motto and features images and stories from fans that connect immigration to the idea “We Are The American Way.” The campaign is an entry point for fans of the film and of the Superman comics who may not be deeply embedded in the immigration debate, but who are interested in knowing more and standing in solidarity with undocumented Americans today. In addition to participating with stories and images along the American way theme, people have the option of exploring Superman’s values of Truth and Justice in the immigration debate by connecting to facts on immigration at DefineAmerican.com and also a petition to the Not 1 More campaign to stop deportations spearheaded by National Day Laborers Organizing Network (NDLON).

Andrew Slack, conceived of the campaign and is co-founder of the The Harry Potter Alliance’s Imagine Better Network. The Harry Potter series gave the HPA the opportunity to learn how best to engage fandoms to build an active and engaged community committed to making the world a better place. Slack says, “We’re excited to connect with The Superman and Man of Steel fandoms and communities to the issue of immigration. The idea is to use story parallels to realize our capacity to change the world. In this case – we hope to engage people to support a better world for undocumented Americans.”

Define American supports allies of undocumented Americans in engaging in bigger and better conversations on immigration. The organization’s founder, filmmaker and Pulitzer-prizewinning journalist Jose Antonio Vargas, shares his own parallel with Superman’s alter ego, Clark Kent, who is a journalist and for many years had to conceal his true identity.

Vargas says, “We welcome this exciting opportunity to work with Imagine Better to engage new voices and potential allies in this pop culture conversation that is really about our shared history and destiny. No matter what our immigration status, our lives are interconnected as Americans. All along, the story of Superman and his motto for truth, justice and the American Way is something that has connected us.”