The Independent Factor: Does Adolfo Carrión’s candidacy strengthen or weaken the power of the Latino vote?

The Independent Factor: Does Adolfo Carrión’s candidacy strengthen or weaken the power of the Latino vote? 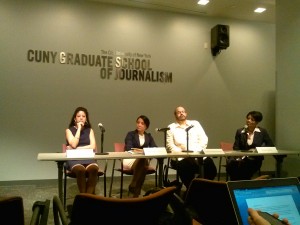 Aldolfo Carrión, Jr. is still running for mayor – in case anyone didn’t know. It’s a little sad that we don’t see him in the news as often as we see Bill de Blasio & Joe Lhota, the democratic and republican candidates of the NYC Mayoral Race 2013. But why is Carrión being left out? Is it because he’s the Independent candidate? Is it because he’s Latino? Is it both? Could his candidacy draw Latino voters away from de Blasio & Lhota? These and many other questions were answered at a panel discussion held at the CUNY Graduate School of Journalism, moderated by Maite Junco, editor of Voices of NY at the school of journalism. Panelist included Erica Gonzalez, editor of El Diario-La Prensa, Debralee Santos, Editor, Manhattan Times & The Bronx Free Press, Carlos Vargas Ramos, Research Associate of Hunter College’s Center for Puerto Rican Studies, and Raysa Castillo, Esq., President of Dominican Women’s Caucus.

Topics like Identity Politics and Liability in Polling Data were discussed in the panel and then the floor was opened up for questions. One interesting point that was made was that Latinos won’t always vote for the Latino that is running, whether that candidate is from the voter’s native land or no. Yes, some may, like many African Americans may have voted for Obama in 2008 and/or 2012, but at the end of the day the voter will vote for the candidate that plans to meet that voter’s needs and the community will do so as a whole to the candidate that is most responsive to their needs. Another point that was mentioned was out of all the adults in the city, 27 percent are Latino but a good chunk of those Latinos aren’t legal, which adds to the discrepancies in polling data. The polling data has shown a lack of the full range of NYC and has classified Latinos as “not reliable” voters since we don’t vote 100% of the time (i.e., voting in federal elections only). We as Latinos have to take hold of the power of our vote!

Since no one is really discussing about Latino issues, which are mostly the same as everyone else’s (jobs, housing, etc.) Carrión seems to be the one who will push those issues. But why is the mainstream media leaving him out? The mainstream media is keeping things simple because they like things simple and Latinos aren’t simple – we just too diverse. Plus, there’s somewhat of a racial bias.

All in all, we have to get out & vote. Let your voice be heard!