Pope Francis papacy began on March 13th 2013 as he became the 266th Pope of the Catholic Church. He has been declared Time’s Person Of The Year and looking back on 2013 it is very well deserved. 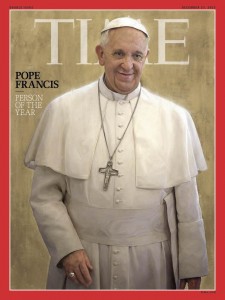 1. He spoke out against frivolous spending by the Church

The average set of cardinal’s clothes costs as much as $20,000. In October, Pope Francis urged officials to dress more modestly and to not squander such money. In the same month, he ordered a German bishop to explain how he had spent $3 million on a marble courtyard.

2. He invited a boy with Downs Syndrome for a ride in the Popemobile

During a general audience, Pope Francis invited Alberto di Tullio, a 17-year-old boy with Downs Syndrome, to ride in his Popemobile while thousands watched. The boy and his father were said to be “chocked up” when he was embraced by the Pope.

3. He embraced and kissed Vinicio Riva

November saw Pope Francis embrace Vinicio Riva, a man scarred by a genetic disease. Fighting agonising pain on a daily basis, such an act restored the faith of a man who says he is often mocked in public.

4. He denounced the judgment of homosexuals

Pope Francis has stated several times that the Church has no right to interfere spiritually in the lives of gays and lesbians. Though Francis maintained the right of the Church to express opinions on homosexuality, he believed that Christians should not judge or ridicule. This led to The Advocate, a gay rights magazine, naming Francis the ‘single most influential person of 2013 on the lives of LGBT people.’

5. He held a major ceremony at the chapel of a youth prison

In March, the Pope held a major Holy Week service at Casal del Marmo jail for minors, rather than the Vatican. During the service, the pope washed and kissed the feet of 12 young offenders to commemorate Jesus’ gesture of humility towards his apostles on the night before he died. During the service, he broke tradition by washing the feet of women and Muslims.

6. He urged the protection of the Amazon Rainforest

During his visit to Brazil, Pope Francis met with natives who have been fighting ranchers and farmers attempting to invade their land. He encouraged that the Amazon be treated as a garden and protected, along with its native people.

7. He personally called and consoled a victim of rape

A 44-year old Argentinian woman, raped by a local policeman, was one of thousands to write a letter to Pope Francis in 2013. The woman was surprised when she later received a phone call from Francis himself–who consoled the woman and told her, “You are not alone.”

8. He snuck out of the Vatican to feed the homeless

More recently, it has been discovered that Pope Francis regularly leaves the Vatican at night to feed the homeless. Dressed as an ordinary priest, he joins Archbishop Konrad Krajewski to feed the poor of Rome.

9. He auctioned his motorcycle to benefit the homeless 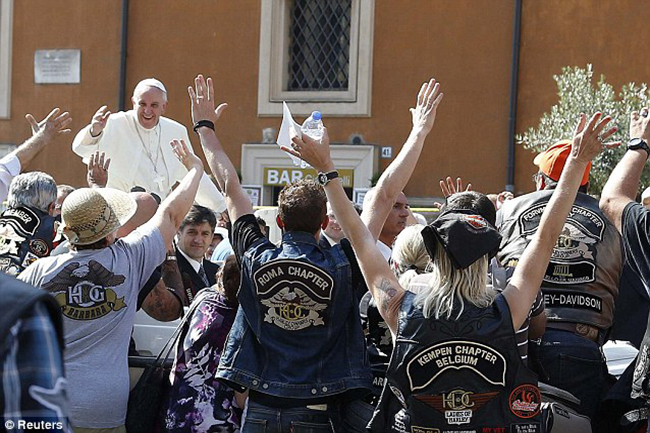 In October, Francis donated his own Harley Davidson motorcycle to fund a hostel and soup kitchen in Rome.

10. He acknowledged that atheists can be good people

Earlier in 2013, Pope Francis spoke out against the common interpretation within the Church that atheists, by nature, are bad people. He stated that, “Atheists should be seen as good people if they do good.” After meeting the Pope, the openly atheist president of Uruguay, Jose Mujica, compared Francis to a friendly neighbor.

11. He condemned the global financial system

In May, Francis denounced the global financial system for tyrannizing the poor and turning humans into expendable consumer goods. He believes that, “Money has to serve, not to rule!”

The Catholic Church has been rocked in recent years by allegations and admissions of child abuse by members of the Church. Pope Francis became the first Pope to take effective action against such atrocities. He amended Vatican law to make sexual abuse of children a crime, and he also established a committee to fight abuse.

13. He condemned the violence of the Syrian civil war

In regard to the use of chemical weapons in Syria, Pope Francis asked for peace and declared that, “War, never again. Violence never leads to peace, war leads to war, violence leads to violence.”

14. He redirected employee bonuses to charity

When a new Pope is elected, Vatican employees receive a bonus. Upon his election, the extra money was given to directly to charity instead.

15. He spoke out against the Church’s ‘obsession’ with abortion, gay marriage and contraception

In a voice of reason, Francis shocked the Catholic world when he stated that the Church was an unhealthy obsession with abortion, gay marriage, and contraception. He criticized the Church for putting dogma before love, and for prioritizing moral doctrines over serving the poor and marginalized.

16. He called for cooperation between Christians and Muslims

In what might be his most progressive feat of all, Pope Francis met with youngsters to be part of a truly remarkable selfie. His is embracing the present, and he is undoubtedly taking the Church to a more loving and accepting future.

18. He invited homeless men to his birthday meal

On December 17, Pope Francis invited a group of homeless men and their dog into the Vatican to share his birthday meal along with his staff. The Pope had decided that he wanted a small birthday event, which would do some good, rather than a large and expensive event.

19. He refused to send away a child who had run on stage to hug him

During the Year of Faith Celebrations, a young boy ran on stage as the Pope was giving a speech. When assistants tried to remove the boy, Francis allowed him to stay.