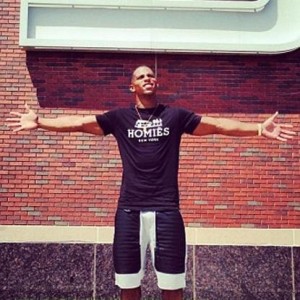 Victor Cruz will be a member of the New York Giants through 2018.

The Giants have just inked Cruz, 26, to a six-year deal worth nearly $46 million, with $15.6 million of that figure guaranteed.

“There was never a time when I felt I wouldn’t be a Giant,” Cruz, LatinTRENDS magazine’s first cover personality in 2012, said after the deal was announced. “It was just a matter of time if I was gonna be with them for one year or the next six. I’ll take the six right now, obviously.”

Cruz, undrafted before he was signed by the Giants in the summer of 2010, led Big Blue in receiving the past two seasons, recording 2,628 receiving yards and 19 touchdowns on 168 receptions in said span.

After making $1.23 million his first three seasons combined, the play-making receiver will be earning an average of $7.64 million per year.