A Clown on Staten Island?

A Clown on Staten Island? 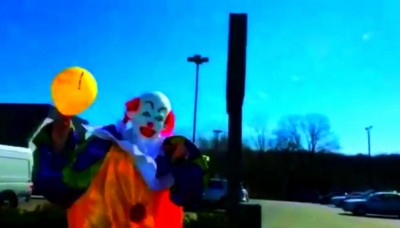 There are but only a few holidays out of the year where people get dressed up and celebrate. But someone had thought to pull a stunt early and if the goal was to get people talking and questioning, it sure did.

Living in Staten Island just got weird, not to mention that it already feels a little secluded from the rest of New York. It is not every day you hear about a clown just roaming the streets on Richmond Avenue.

The person that wore the clown costume is unknown, but resembles Stephen King’s terrifying character Pennywise from “It”. The clown wore a yellow outfit, red shoes, and a mask. Being that the island is small, everyone knows almost everyone and the stunt may be linked to Fuzz on the Lens Productions, a Staten Island film company. The stunt started out as a prank and then turned into a project, but was by no means meant for a promotional stunt. That would be hard to believe since the video that was made went viral and people were talking about it.

Whether you are creep out or think it is wrong, the clown was not disturbing anybody, so the police were not involved; the clown was just creating attention.

The clown may just be part of a marketing stunt and the video that was made by Vic Dibitetto and went viral soon after it was made through the social networks of Facebook, Twitter and Instagram.