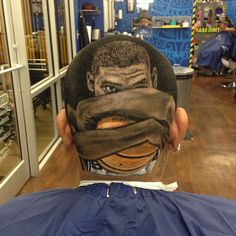 Why is art such a mysterious thing that only the artist can understand? Because they express themselves for what they see and not what the naked eye sees. They see something in a plain format, which is then translated into a sculptor, painting or some other effect.

This idea is parallel to a writer’s way of thinking where they start with a blank sheet of paper and begin to form words that are not only poetic, but take you into a different word and as a result, authors are created.

Take tattooing for example. It is a form of art created on the body where the object or in this case, a portrait, is inked on a person’s body.

In Texas, artist Rob Ferrel, also known as “Rob the Original”, from Los Angeles is a barber and stylist. As a hairstylist, you not only have to keep up you reputation, but also come up with new styles. In Ferrel’s case, he makes portraits on the customers head.

Ferrel had a passion for art and hair because when he was younger, he used to cut his own hair. By combining the two passions, he was able to create these portraits. One of his very first portraits was on his brother and it was of the rapper Tupac Shakur.

Additionally, the types of portraits that he does are of music artists and San Antonio Spurs players and now with the World Cup playing, inspiration has gone to now soccer players.

The process of making the portrait starts with a picture of the person off of his phone. Then, he uses trimmer, straight razors, non-toxic eyeliner, and lip liner pencils to fill in the details and complete the drawing. Afterwards, he uses hair spray as a protective layer over the tattoo.

In addition to this tattooing, there are also 3D tattoos and on the down side, there is a law that is banning the tattooing of animals.