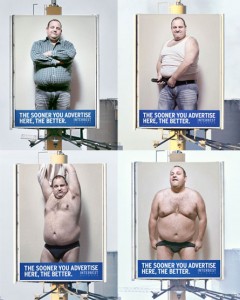 In The Netherlands, billboard company Interbest filled their unsold advertising space with a hairy bear of a hot man who stripped off a different piece of clothing for every day the space went without an advertiser. People driving past slowly got an eye full of his furry chest pies and his huge gut of glory. And just when he was about to pull down them panties to show the real goods, a radio station bought the ad space and saved the people! Interbest’s blackmail campaign worked! Uh huh.

Interbest planned it like this. They viciously teased the public and then BAM! They shut down the party. Because there’s no way anybody would buy advertising space just as the Interbest Hunk was about to show us what’s in his honey jar. Who doesn’t want to see that sort of thing?! If they really wanted to scare people into buying ad space, they would’ve put up a 3..2…1 countdown to playing a J-Lo song.