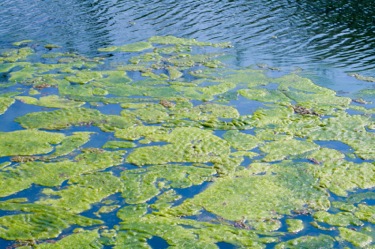 The Naughty Nutritionist ® Inc. whose brand makes nutrition
fun and easy for active consumers and athletes, announced today the national launch of their
algae tabs: ENERGYbits™, RECOVERYbits™ and VITALITYbits™, collectively known as
Naughtybits®. It’s only appropriate that a Boston company is putting algae back in the spotlight, for
Boston is where the story of algae first grabbed national attention sixty years ago. In 1951, algae was
touted as being the answer to America’s escalating nutritional needs. Earlier research funded by
The Carnegie Institute had confirmed that algae’s protein and nutritional profile was unmatched by
anything else in the world. It was time to put algae to the test and into production. Boston was
selected as the site and America’s first commercial algae facility was off and running. It was a world
first.
That all took place sixty years ago when algae was expected to provide the solution for the country’s
escalating nutritional needs. The intense focus on algae had resulted from its successful use as a
protein source in both Germany and Japan, when starvation had been rampant after WW I and WW II.
With two successful deployments of algae as food during both wars, algae looked like it could be the
perfect solution for America’s escalating protein needs as large numbers of soldiers returned home to
start families.
www.naughtybits.com 2
Research into algae as a food source had been funded by the Rockefeller and Carnegie Institutes
1947-1950 and the promising results had led to the decision in 1951 to fund the first commercial algae
plant. It was a pilot plant but it was still the world’s first. Arthur D. Little built the plant in their
Boston (Cambridge) MA facility amid enthusiastic projections and high expectations, which ultimately
couldn’t be met. A year later, algae proved too challenging to grow in a cost effective manner. The
pilot plant was shuttered and so were Boston’s dreams of being the city to bring algae to mainstream
America and solve the country’s nutrition crisis.
But the story doesn’t end there. W hile Boston’s chance to introduce algae to America did not
transpire as hoped in 1951, sixty years later another Boston company, The Naughty Nutritionist® Inc.
may finally make the dream come true in 2011. How this came about is a testament to the miracle of
algae. After the Cambridge pilot plant closed, the Japanese took a stab at growing algae. They
seemed more determined to get it right, possibly because chlorella algae had not only saved them
from starvation but had also healed them from Hiroshima’s radiation poisoning. It took ten years and
countless attempts but by the early 1960’s, the Japanese were growing chlorella algae on a large
scale and had even patented some of the production techniques. Algae is now a multi billion
dollar industry in Japan. Most Japanese don’t leave home in the morning without first taking their
chlorella algae, similar to how many Americans take Vitamin C. However, algae’s nutritional profile is
a hundred times greater than that of Vitamin C. In fact, algae has been heralded by The World Bank,
The United Nations and many other world authorities as being the most nutritionally dense food in the
world. Even NASA says “1 kg of algae has the nutritional value of 1,000 kg of fruits and vegetables.”
With 50 years of use in Asia confirming its safety and over 100,000 scientific studies confirming its
nutritional profile (unmatched by anything in the world), the Founder of The Naughty Nutritionist® felt
it was time that mainstream Americans were told about this remarkable super food. Ironically, the
endless amounts of data and research documenting the benefits of algae resulted in it taking over two
years for the company to sift through the data to select a handful of talking points that could make
algae fun and easy for mainstream Americans to understand. The stakes are high. Something needs
to be done to end America’s health and nutrition crisis. The debate is no longer whether good nutrition
is the answer. It is. The larger question is how to encourage more Americans, especially young
consumers to take a bigger interest in it. Algae could be the solution. And why not? It is a nutritional
gold mine and now that it’s successfully grown for large scale consumption, production is no longer
the challenge. Figuring out how to encourage Americans to take it, is.
The products and branding introduced today by the Naughty Nutritionist® may provide the answer.
They make algae easy to understand, hip and even stylish. It’s certainly a new approach. Some even
www.naughtybits.com 3
might say, revolutionary. But it’s hard not to smile at the brand or company name. And that’s the
whole point. The Naughty Nutritionist’s® primary goal is to make nutrition and algae fun. And why
not? Steve Jobs used a similar strategy to make computers fun, and in so doing, he totally
transformed the tech landscape and grew Apple into one of the world’s most adored and successful
brands worldwide.
Sixty years have passed since algae first arrived in Boston. Today’s national launch of Naughtybits®
algae tabs, may finally give both Boston and algae the chance to regain the nutritional spotlight they well
deserve. Welcome home algae.

Just in Time for Halloween: Lessons Learned while Living with the Dead!
Drink of the Day: Pumpkin Punch!
Translate »