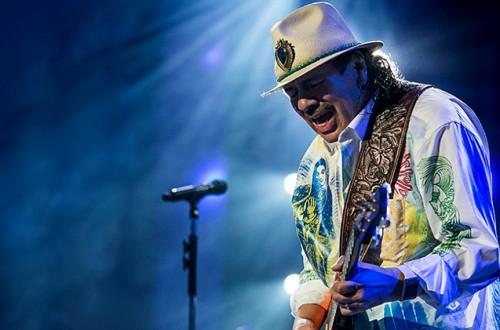 Carlos Santana is a music legend. Born in Mexico, he became involved in music at a very young age. Growing up the son of a mariachi musician he learned to play the violin and the guitar. As a youth he was inspired by rock pioneer Ritchie Valens, who made rock’n’roll music with Spanish songs.

By the time Santana was in his teens his family moved to San Francisco. After deciding that school was not for him, he made a living during the hippie movement of the 1960s by busking and washing dishes. It was during this time he was exposed to other styles of music like folk and jazz. After seeing his musical idol B.B. King play live, Santana decided to no longer work for little to nothing and dedicate himself into becoming a musician.

His chance in the spotlight was serendipitous. When blues singer and harmonica player Paul Butterfield was too drunk to perform at the famous rock venue Fillmore West, which he often went to watch shows, Santana’s manager was able to convince concert promoter Bill Graham that the guitarist should play. Suddenly, Santana was part of an impromptu group making music and no longer just a witness to great music.

Shortly afterwards, Santana created a group with fellow street musicians,  David Brown, Marcus Malone and Gregg Rolie. Starting off as the “Santana Blues Band” and then just “Santana,” the group was able to get a record deal riding off of the guitarist’s momentous debut at Fillmore West, a memorable performance at Woodstock and the new sound they were able to bring together from their different backgrounds.

In 1969 the world got to listen to the “Santana” album. It was a blend of African rhythms, blues, jazz, salsa and Latin-infused rock. The group produced the hit song “Evil Ways” and went on to have a triple-platinum album.

As the band released more albums throughout the drug-addled 1970s, the lineup changed and Santana was eventually the only original member of the group, as well as its star. However, he quickly became disenchanted with the rock’n’roll lifestyle and decided to seek spirituality within himself and his music.

While he remained with his band in the 80s, he also made his own music. In 1986 he released his first solo album, “Blues for Salvador,” which was a critical success and garnered him his first Grammy award for Best Instrumental Performance.

Santana would later tour extensively, and in the 1990s he had his own label, “Guts and Grace.” One of the first albums on the label was with his younger brother Jorge and nephew Carlos Hernandez, titled “Brothers.” This helped him achieve his second Grammy nomination for Best Instrumental Performance.

While Santana continued to achieve critical praise mostly on his own, he never forgot how he started, with his band. He went back to basics by re-signing the band with its first producer, Clive Davis and in no time his 35th album, “Supernatural” put him and his group at the top of the music charts once again. The album sold over 10 million copies worldwide, earned the group nine Grammy nominations and they won eight, the ninth award went to the songwriter of the band’s hit song “Smooth.”

In the 2000s, Santana was a Lifetime Achievement recipient from the Billboard Latin Music Awards. In 2013 he was a Kennedy Center Honoree and in 2014 he released his first ever Spanish-language album, “Corazon.” On his 68th birthday, July 20th, 2015, Santana was announced to have won an American Book Award for his 2014 memoir, “Universal Tone: Bringing My Story to Light.”

Today he is performing in the United Kingdom and he will be bringing his tour back to the United States on August 14.