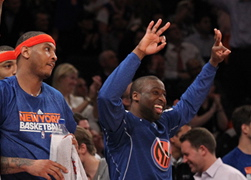 The Knicks’ Carmelo Anthony (l.) and Raymond Felton (r.) enjoyed a laugher over the Pacers in Game 2.

The New York Knicks bounced back from their lackluster effort last Sunday in Game 1 of their second-round series vs. the Indiana Pacers, winning Game 2 at home Tuesday night 105-79.

New York’s blowout victory—facilitated by the Knicks’ field goal percentage of .495 (44 of 89) on the night—evens the best-of-seven at a game apiece. Knicks forward Carmelo Anthony had what was easily his best game in over a week, dropping a game-high 32 points on Indiana on 13 of 26 shooting.

The Knicks’ starting backcourt was also very efficient in the Game 2 win. Iman Shumpert, Raymond Felton and Pablo Prigioni finished with 15, 14 and 10 points, respectively, and combined for five 3-pointers in seven attempts.

Indiana’s Paul George scored a team-high 20 points, and George Hill and David West chipped in with 12 and 13 points, respectively.

The series shifts to Bankers Life Fieldhouse in Indianapolis for Game 3 Saturday night. Saturday’s matchup is scheduled to start at 8 p.m. ET.