3 Things We All Thought While Watching the Republican Debate

3 Things We All Thought While Watching the Republican Debate

Last night’s Republican debate at the University of Houston, was the last chance candidates had to sway voters to their side before “Super Tuesday” on March 1st, the largest multi-state primary caucus. Despite there being five men on stage, the three major players in the debate were Senator Marco Rubio (FL), businessman Donald Trump, and Senator Ted Cruz (TX). Moderated by CNN’s Wolf Blitzer the panel was composed of Telemundo’s Maria Celeste Arraras, CNN’s Dana Bash, and Salem’s Hugh Hewitt.

With each candidate fighting to make an impression on Republican voters the topic of immigration policies was the first to come up. With Maria Celeste lighting a fire underneath the candidates, things got interesting.

Is it Entertainment or Politics?

A poll recently taken by Telemundo stated that 3 of 4 Hispanics that vote nationwide have a negative view of him. In her question Maria asked if Trump thought this made him an “un-electable” candidate. He fiercely negated this saying, “I don’t believe anything Telemundo says” but once Arraras reminds him he is on record as saying he “loves Telemundo” he quickly took back what he said. He went on to say that all his disputes with the Hispanic community are minor, regardless of his past problems with Univision as well as his comments about Mexican immigrants. 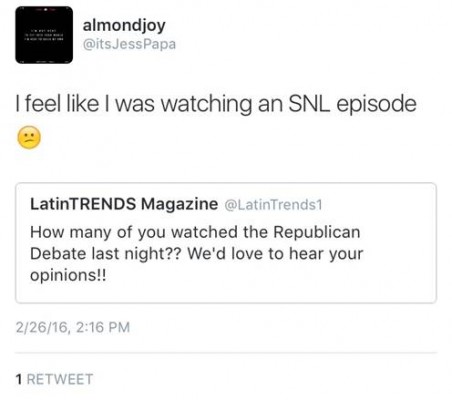 Are we watching SNL or a debate? Find us on Twitter!!

The Debate was a Circus

Both Senators seemed to have a few choice words to say about Trumps previous business failures and his plans once he becomes president. Rubio in particular criticized Trump hiring 1,000 illegal immigrants in the past by stating “if he builds the wall the way he built Trump Towers, he’ll be using illegal immigrant labor to do it.” Trump fired back mocking Rubio, “such a cute soundbite.”

The debate was filled with this banter including Cruz supporting the allegations of Trump having been fined 1 million dollars for hiring illegal Polish immigrants to work on his projects. One of the harshest comments of the night was made by Rubio in regards to monetary advantage saying that Trump would be “selling watches in Manhattan” if he hadn’t inherited the hefty sum of 200 million dollars. 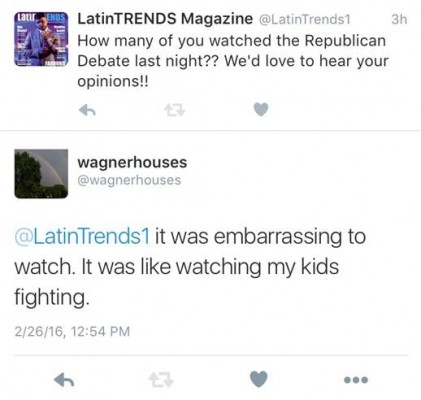 Looks like things are getting heated in the sandbox…

As both Cruz and Rubio are of Cuban descent, Maria asked if Cruz felt he was missing the opportunity to expand the Republican base by appealing to Latino voters. Both candidates went on to say they were proud of where they came from but that steps had to be taken to ensure the country’s safety. Both their policies include mass deportation, establishing a guest worker program, and strengthening the southern border. The surprise of the night was former neurosurgeon Ben Carson’s direct response saying that once the Republican party expressed that they wanted  the Latino community to be part of “the fabric of America” they would see a swell in the Republican base.

As the two hour debate came to an end it finished with the candidates repeatedly talking over one another and Donald Trump telling Senator Cruz “don’t get nervous” to which Cruz responded with “I promise you, Donald, there’s nothing about you that makes anyone nervous.”

Although Trump had a rough night there was no clear winner in this debate because the moderator couldn’t seem to keep the candidates under control. All candidates stand to gain or lose a lot on “Super Tuesday” but last night they lost themselves in petty argument. This election promises to be one of the most interesting ones our generation has ever seen.

*Governor Chris Christie (R, NJ) announced today that he would now be publicly endorsing Donald Trump to the dismay of many who have voiced their opinions on social media. 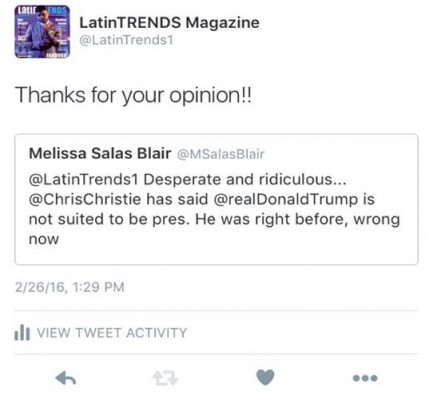 “Motivating Through Mentors” – OITNB Cast call for more Diverse Mentors
Historic Moments for Mexico & Chile at the Oscars
Translate »
%d bloggers like this: