No Thank You, Cruz: Two Latino Groups Say No to Ted Cruz

No Thank You, Cruz: Two Latino Groups Say No to Ted Cruz 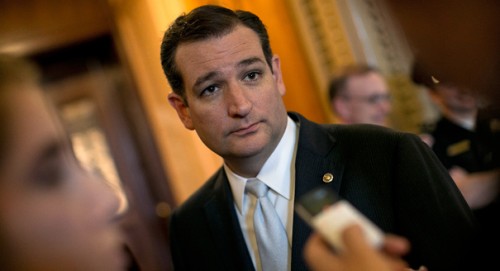 Son of a Cuban father and an American mother, the thought of Cruz winning the chance to run for the White House in the 2016 election and possibly becoming the first Latino president in the country’s history is quite upsetting because not only does he pose a threat to all Americans, but his very own political views threatens to alienate Latinos living in this country.

Accepted by the tea party and most conservatives, Cruz is what you can call the boy scout of anti-immigration rhetoric who has made it very clear how much he opposes any plans made by President Barack Obama’s in his executive action on immigration that would help the many undocumented citizens currently living in the country.

Of the estimated 1.4 million or more immigrants who currently live in the country, if Cruz would become the next president you can most likely expect programs under the Deferred Action to be at risk.

Children immigrants who entered the country under the age of 30 are typically referred to as Dreamers, promptly named after the Development, Relief, and Education for Alien Minors Act that was heavily campaigned for back in the early 2000s that aimed at providing a reprieve to youths identified as immigrants and faced deportation because of this status. While popular and heavily fought for the act failed to pass, but all was not lost.

From its defeat, the Dream Act lived on in several other programs aimed at aiding immigrants as well as one coalition. The Dream Action Coalition is an organization that defends the rights of immigrant youths or Dreamers who benefit under a program President Obama announced back in October 2012.

The Deferred Action for Childhood Arrivals, or DACA, is a program aimed at helping undocumented immigrants who entered the country prior to their 16th birthday, completed or are enrolled in high school or an educational program of some sort, and were under 31 as of June 15, 2012 who have been residing continuously in the country since 2007.

And as of November 20, 2014, when President Obama revealed his executive action and plans regarding immigration he announced that the DACA program will be expanded into early 2015 and would now include undocumented immigrants of age 31 and up with undocumented immigrants who have resided continuously within the United States since January 1, 2010.

“The only policy of Ted Cruz that Latinos hear is that he wants to do away with DACA for the dreamers, block (the associated) DAPA (program) for our parents and obstruct immigrant reform for years longer,” said Cesar Vargas and Erika Andiola, co-directors of the Dream Action Coalition, discussing what Cruz would do if given the power of presidency.

Much like DACA, Deferred Action for Parental Accountability or DAPA is a program also announced last November by Obama and it is aimed at helping undocumented parents avoid deportation and separating from their children who are U.S. citizens or are permanent residents and prove that they have lived in the country since before January 1, 2010. Parents of legal residents must also have no a criminal record.

The intention of both programs is to ensure that children, their parents, and families in particular who present no harm and are trying to live a normal life do not fall under the ramifications of their status and must endure a separation because one or more members of the family are illegal and face deportation.

“Although Ted Cruz has a Latino name and immigration in his past, there the similarities between the Latino community and him end,” said Vargas and Andiola, further making their displeasure with Cruz known.

Joining the coalition in their feelings regarding Cruz attempting to attain the Republican nomination and possibly win the presidential election is the CASA in Action. Established back in 2010, CASA in Action is a non-profit organization based in Virginia & Maryland which engages in providing educational, legislative, and political activities that support Latinos and immigrants living in the two states. During election seasons, CASA informs and engages with Latinos and political candidates in order to find a fitting politician who would aid and benefit the former.

And much like the coalition, CASA finds that Cruz going for the Republican nomination won’t do harm to American citizens as a whole but to the party itself.

“If they don’t turn their policies around, Virginia Republicans are facing political oblivion. Accepting anti-Latino and anti-immigrant candidates like Ted Cruz is not a recipe for survival,” said Lindolfo Carballo, the Virginia director for CASA in Action, warning other politicians of the domino effect Cruz will have on their political ambition if they were to support him or have similar views.

In this country it is your natural given right to believe whatever it is you believe in. However, it is not in your right to demand that others believe in what it is you believe. Cruz, like many of his fellow Tea Partiers and Conservative supporters, they do not seem to follow this ideology. While the tea partiers and some conservatives values seem noble, they are only noble to those who follow or live a lifestyle they deem righteous but condemn and shun others who do not fit that image due to racial, economical, religious, or sexual background.

In a country consisting of numerous cultures from various parts of the world, this way of thinking is dangerous because the upholding of people living a way that you deem worthy is not only harmful but it is nullifying life.

America is slowly changing, become more open, but with a candidate like Cruz seeking office every small step that has been taken forward will be one large leap backwards if Cruz or someone similar enters the White House.