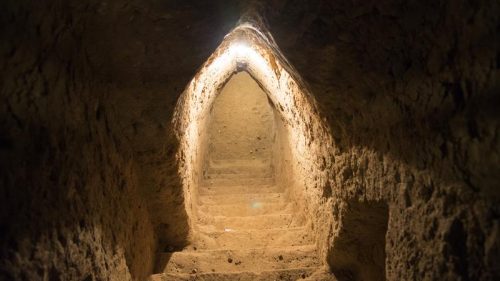 Mexican officials tell say the tunnel opened in 2016 and right away more than 140,000 people have flocked to see them.

“It’s something new. It’s part of our story here in Mexico and it’s so interesting and important for us to know our history,” said a local resident”.

The tunnels are part of an underground history that the almost 500-year-old city is calling the “Secrets of Puebla”.

In 2014, a construction crew was building an underpass in Puebla. Initially, there were plans to build an overpass.

But Puebla is a historic city and officials want to preserve it. In the midst of digging, a crew found the remains of a dam and a tunnel.

A year later, this excavation project began. It’s believed there are as many as 10km of tunnels, spanning from the 16th to the 19th centuries.

“You can have tunnels and caverns in lots of parts of the world,” says Sergio Vergara, Director of the Historical and Heritage Centre of Puebla. “But here, the interesting thing is that these tunnels are under the city. That’s what makes this network important.”

Scholars think the tunnels are probably about as old as the city of Puebla, which was founded in 1531. It’s likely that the conquistadors who built the city had the tunnels constructed so they could move swiftly and freely from one part of the city to another in case of attack.

As the years went by, the tunnels expanded, and so did their purpose. Nuns and priests could travel to and from each others’ churches without going above ground, and military forces could travel to nearby Fort Loreto without alerting suspicion.

In fact, the entire network of tunnels could be accessed from a few main entrances, including one right in the middle of town.

“The concept that people would move underground as part of their lifestyle, instead of above, gives you a new idea about how mobility was in the colonial time here,” says Vergara.

“You’d go from the indigenous areas to the Spanish areas, to the churches, the areas of power and to the battlegrounds and barracks.”

Construction workers are excavating by hand and it’s a painstaking process, as you can imagine.

“When we got here it was all filled up, right to the top. We’ve had to empty out the muck, just with buckets, carrying on your shoulder and taking it up,” says worker Leopoldo Barrientos Aranda. “There’s no other way to do it.”

The work crew have also unearthed artifacts such as bullets and buttons.

The city hopes that over the next 15 years it will be able to fully excavate the extensive network of tunnels.

In the meantime, officials tell us there is such feverish interest in the tunnels that many hotels are being constructed.