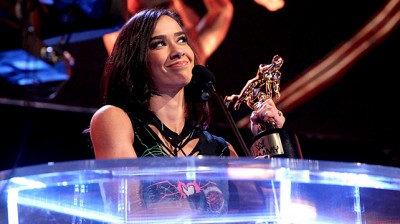 The 2014 Slammy awards of the WWE, World Wrestling Entertainment, saw a subtle pipebomb drop from the wife of former WWE superstar, CM Punk. The “Diva of the Year” award was announced and it went to April Jeanette Mendez, now Brooks. You know her better as the three time Divas champion.

AJ, the Puerto Rican women’s wrestling star, made a couple points which alluded to a possible absence in 2015 when she spoke of several of the women wrestlers who could win next year. She also reminded as she has before that she brought a class to a division that has been transformed from a womens wrestling product to a hybrid athletic/beauty queen type of title known as a “DIVAS’s championship.

“You can be a nerd, a tomboy, and the longest reigning DIVAS’S champion of all time.”

AJ has been rumored to be performing hurt and may end up out the company on the heels of her husband, who left for similiar reasons. She was seen next to Punk at UFC 181 as her husband recently signed with the UFC.

5 Healthy New Year’s Resolution
Ways to Get Out of Debt & Prosper in 2015
Translate »
%d bloggers like this: