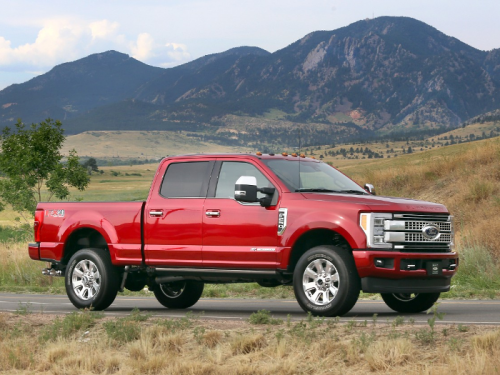 Customers now expect more than superior capability from their trucks. They demand more technology to get the job done quicker and easier.

Here are the top five class-exclusive technologies that customers are choosing, never before available on Super Duty until now:

Texas – home to Ford’s two largest truck regions – saw Super Duty sales rise 45 percent in Dallas and 38 percent in Houston. More than 81 percent of these sales include Lariat, King Ranch and Platinum series trucks, with demand for 4×4 and Crew Cab configurations outpacing the rest of the country by 97 percent.

“The technology features in the new F-Series trucks, in particular the all-new 2017 Super Duty, are generating even greater interest,” said Chaz Gilmore, managing partner, Grapevine Ford Lincoln, near Dallas. “This truck is bringing a lot of new buyers out of competitive brands and into the Ford family. Ford really knocked it out of the park with this truck’s performance, options and technology offerings.”

The all-new Super Duty beats the competition on virtually every metric, with 925 lb.-ft. of torque, a 7,630-pound payload and 32,500 pounds of gooseneck towing capacity – but its 20 class-exclusive technologies really up the ante. High-series trucks equipped with such exclusive features as adaptive steering, Trailer Reverse Guidance, adaptive cruise control with collision mitigation, Blind Spot Information System (BLIS®) with cross-traffic alert and trailer tow are what customers really want.

With its first major redesign since being introduced in 1999, the all-new 2017 Super Duty takes heavy-duty pickups to the next level in toughness, smartness and capability.

Ford Motor Company is a global automotive and mobility company based in Dearborn, Michigan. With about 203,000 employees and 62 plants worldwide, the company’s core business includes designing, manufacturing, marketing and servicing a full line of Ford cars, trucks and SUVs, as well as Lincoln luxury vehicles. To expand its business model, Ford is aggressively pursuing emerging opportunities with investments in electrification, autonomy and mobility. Ford provides financial services through Ford Motor Credit Company.  For more information regarding Ford and its products and services, please visit www.corporate.ford.com.