Music is definitely one of Latino’s biggest passions. We live it. We dance it. We enjoy it to the fullest. The same most definitely goes for DJ Alex Sensation, who works for the Hispanic radio station with the highest ratings, La Mega 97.9 FM. We had the opportunity to talk to him about his life and his career.

Alex Sensation was born in Bogota, Colombia, under the name of Javier Alexander Zalazar and immigrated to the United States when he was young. His interest in music started through his brother, who used to take him to the clubs where he played Thursdays and Fridays. He began a music collection, and by the time he was 16, he was making good money as a DJ in various night clubs. At age 17 he was working in the Copacabana club, where he used to say he was 19 in order to work there. He dropped out of school to continue pursuing his passion in music. Till this day, he considers himself a “high school dropout.” Alex worked hard and had different kinds of jobs like valet parking, maintenance, etc. But he never stopped working with music.

Alex continued the interview and told us how he ended up working in radio. Mister Tony Luna, programming director for Amor 93.1 FM once went to the Copa and heard the mixes Alex Sensation was doing. Back then Mr. Luna was the programmer for Caliente 105.9 FM; he offered Alex a position as a DJ on the weekends, but only as a mixer. 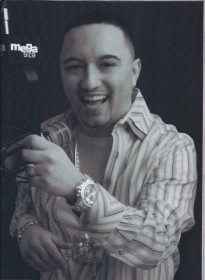 “I worked with Caliente for a year and a half until they switched to Latino Mix. Four months after being on Latino Mix, La Mega offered me to work as the main mixer of the already established segment ‘La Mega Mezcla del Medio Dia.’” This was six years ago.

Alex’s life revolves around music and his work doesn’t finish when he’s not in front of the mic. He enjoys what he does and has two different programs on the radio station: “La Mezcla del Medio Dia,” at 12 PM and “La Gozadera,” from 7 PM to 11 PM. From there, he goes back to his studio at home where he creates his mixes. He visits the night clubs regularly because, as he said, “music is my everything and, of course, I make time for my family, my two children and my wife.”

Alex enjoys mixing different genres, but his roots as a mixer are linked with tropical music. “I grew up with salsa and cumbia, because of my roots. When I was playing in the clubs on the weekends, it was a Dominican club. There I learned about the Dominican culture – bachata, merengue, merengue tipico – when I was still very young. I made many Dominican friends and I fell in love with their culture. Nowadays, my passion is everything within Caribbean music. I mix it all under that genre, but also knowing what the Anglo market has to offer. I’m well versed in all markets. I have a full package,” he said laughing.

But Alex is not staying still. His goals go beyond what he’s currently doing. “My goal is becoming one of the most important radio personalities, not only as a disc jockey but as a radio speaker and a mixer. One of the projects I’m working on now is a reggaeton CD that my friend Hector “El Father” is helping me to produce. It will include artists of that genre such as Wisin & Yandel, Zion & Lenox, Trebol Clan, and Romeo Santos of Aventura.”

About the piracy subject, Alex feels helpless. “That is a problem that unfortunately we cannot stop.” He sends a message to the people that are producing illegal material and also to his fans: “To the pirates, thanks for the promotion, but don’t forget that I’m here and send me my share of the check every now and then. To the listeners who called the radio station asking me for discs of my mixes, I’ll give them to you, the only thing I ask is that when my original productions release, please buy the original and not the fake ones.”