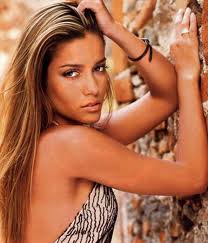 Adriana Fonseca (born March 16, 1979 in Veracruz, is a Mexican actress.

She started her acting career performing in a local television show. At the age of 16 she was accepted in C.E.A (Centro de Education Artistica) in Mexico. Winning the award in the competition  ” El rostro de El Heraldo de Mexico” in 1997, she participated in the soap opera “La Usurpadora” starring Fernando Colugna and Gabriela Spanic.

Adriana had an important role in the soap opera “Rosalinda” next to Thalia where she played the little sister of Rosalinda, Lucy.

She had her first protagonistic role in the soap opera “Amigos Por Siempre” next to Ernesto LaGuardia and other talented actors and actresses. She combined this soap opera with a theater performance “Mama nos guita los novios” with famous personalities such as Angelica Maria, Hulio Aleman. Adriana also had some roles in other soap operas such as “Gotita de amor”, “Preciosa” but the role of Rosalinda’s sister gave her tremendous exposure. Now Adriana comes back to star with Rene Strickler in a ten-episode soap opera called “Mujer Bonita” where she plays a beautiful woman named Charito. Adriana is one the brightest new stars of novelas. She used to model, and 1999 was the year of her big break, when she landed roles on Gotita de Amor, Preciosa, and La Usurpadora. At 1998’s Premios Lo Nuestro, she won the award for Rostro del Año.

She has recently gained tremendous exposure in the high profile role of Rosalinda’s sister Lucy on Rosalinda.