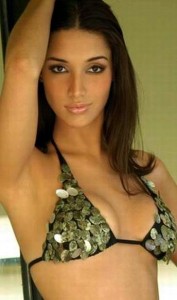 Amelia Vega Polanco (born November 7, 1984 in Santiago de los Caballeros, Dominican Republic) became the first Dominican woman to be named Miss Universe, in 2003. At the age of 18, she was the youngest winner since 1994.

Vega’s father, Otto Vega, is a general medical practitioner with offices in New York City and Miami. Her mother, Patricia Polanco Alvarez, also born in Santiago de los Caballeros, was a previous national titleholder who represented the Dominican Republic at the 1980 Miss World pageant. Vega is the niece of the Grammy Award–winning singer Juan Luis Guerra.

Vega has appeared in the cover of several magazines, from her local country’s Mujer Unica and Oh! Magazine, up to internationally known Cosmopolitan, Caras, Vanidades, Harper’s Bazaar, Glamour, Selecta. She also has been the lead image for campaigns made by the beauty cosmetics company Cover Girl, for the past 4 years.

Vega debuted as a singer with her uncle “Juan Luis Guerra” in Madison Square Garden and American Airline’s Arena. After her reign as Miss Universe came to an end, Vega worked as the host of the reality show Voces de América, that aired on the Telemundo network. She also hosted several editions of “Festival Presidente” where more than 60,000 people attended, Later she hosted “Suegras”, a reality show broadcasted in “USA” and Latin America. Her film debut was in 2005, co-starring in the film The Lost City directed by Andy Garcia. She had a special in Homie Spumoni, a motion picture starring Donald Faison. and Whoopi Goldberg, among others and was scheduled and released in summer 2008.

She also performed the video of “Mi corazoncito” of Dominican bachata music group Aventura. She played the part of the singer’s girl.