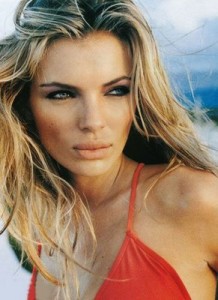 Esther Cañadas (born on March 1, 1977 in Albacete) is a Spanish actress and model.

Originally, Cañadas wanted to pursue a career as a criminologist, but her mother persuaded her to give modeling a try.

Cañadas signed her first contract with the Take 2 Agency after winning a local competition for a teen magazine. She represented her country in a model search and was sent to South Africa. She then moved to Barcelona on her own to begin working.