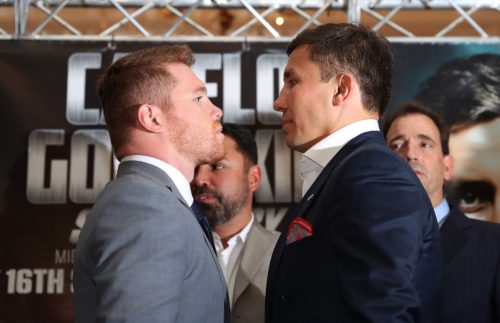 For quite some time, Canelo and GGG have been boxers, who have dominated their sport. GGG, the IBO, WBA, WBC and IBF world middleweight champion, sits at 37-0 with 33 wins via knockout. Canelo, the former world light middleweight champ and former WBO middleweight champ, is 49-1-1 with his only loss coming at the hands of Floyd Mayweather back in September 2013. Both are incredible technicians with knock out power and they have claims to being the No. 1 pound-for-pound boxer in the world.

In May 2016, Canelo handed his WBC middleweight title over to GGG (Genady Genadavich Golafkin) voluntarily, vacating the belt after refusing to meet the World Boxing Council’s demands. He was accused of ducking the fearsome puncher by many, including the media.

However, he said at the time that he feared no man and would one day battle the heavy handed knock out artist GGG, on his own terms and he has stayed true to his word as the fight will take place in Las Vegas on September 16.

Canelo is 27, GGG is 35 and because of this Canelo has the youth element on his side (less wear and tear). Neither fighter has ever been knocked down or knocked out,

Golovkin owns the middleweight division – he has destroyed everyone they have put in front of him, except his last opponent, Danny Jacobs, whom GGG was not able to knock out, like all the rest, but won a close decision. GGG has become popular with his fan friendly style and impactful knock outs. Canelo has also won over many fans outside of his native Mexico by-way-of his superb boxing skills and a string of brutal knockouts, which many of his opponents have suffered. He has fought at welter, light middle and middle weight and he is rumored to be able to pile on as much as 20lbs between the final weigh-in and first bell.

Unlike a lot of fhttps://youtu.be/YjunmC72rhwights this needs no trash talk, social media campaigns or promotional tools. This fight has the potential to be the fight of the decade, based on both boxers power, ability, skills and experience. in the end the smartest fighter should win…but another element which may decide the winner is, who wants it most!

Canelo Vs. GGG 2 | Tale Of The Tape & Story of Their Lives

The Highest Paid Latino Athletes of 2017 (so far)

The Highest Paid Latino Athletes of 2017 (so far)
Canelo Vs. GGG 2 | Tale Of The Tape & Story of Their Lives
Translate »
%d bloggers like this: