Carolina Cadillo, morning radio personality for nearly 20 years, has anchored various newscasts. But when she arrived on “El Vacilon de la Manana, she was part of a change in Latin talk radio. By being part of Luis Jimenez team she earned the moniker of the Spanish ” Robin Quivers.”

Carolina has been running through peaks and valleys, appearing in the Vagina Monologues as herself and eventually rejoining Luis in the “Luis Jimenez Show.”

But now Cadillo is looking to make her latest project, a podcast called “Carolina Cadillo Show” the latest craze since it launched in September. She is joined by Jeff Jenson, a 30 year broadcast entertainment veteran. And he speaks Spanish!!!

The other member of this team is Carlos “Guebin” Molina, from the Dominican Republic via Queens. He made a name for himself by being a persistent regular caller for Luis Jimenez’ show. He earned the nickname “Guebin” through a risque stunt that will not be mentioned here. 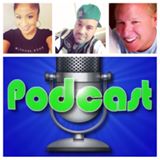 Sorry to disappoint, but already New York has been energized through this unique trio and the feedback gives an indication of how far this show can go. Its groundbreaking in that it flip flops between English and Spanish which has opened up opportunities. Carolina is not sitting around for the next gig, she created one, and now New York will benefit.

Fashion Starlette brings Eye Candy Sass to Sabado Gigante
Artists leave their mic on stage for the cause!!
Translate »
%d bloggers like this: