Christina Aguilera (@xtina) Taking Her Seat Back on The Voice

Christina Aguilera (@xtina) Taking Her Seat Back on The Voice 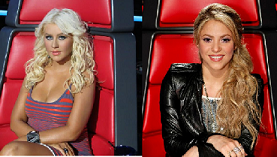 It has been confirmed that former judge Christina Aguilera will take her seat back on NBC’s highly successful singing competition The Voice for season 5. Shakira took over the judges seat for season 4 since Aguilera was working on an album and a tour. The Colombian singer admits to having a difficult time balancing motherhood and coaching. She stated “It was a hard decision for me to make, because I’m really fond of the coaches, the people in production and everybody around me. And I really enjoyed The Voice, but I also have a musical career and I’m also a mother now and my poor baby’s so tired flying such long distances. He already has more miles than any pilot. So I think I have to give him a little break, and we’ll see what happens in the future.”

Host Carson Daly confirmed that Aguilera would definitely be coming back and said in a statement “We’re all excited. She helped launch the show, and like we’ve said with all of our coaches, this isn’t their day jobs. They’re not celebrity judges, they are real artists and they have to tour and it’s great to have her come back into the fold.” Daly was not too sure of former judge Cee-lo Green’s coaching status. “I think they are working on a deal, to be honest with you, and I don’t think it has been finalized, he said.