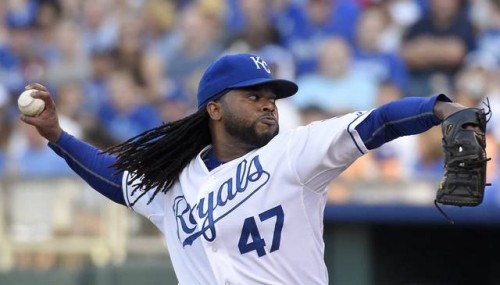 The Kansas City Royals made it two for two at home Wednesday Night at Kauffmann Stadium as they defeated the New York Mets 7-1 to take a 2-0 lead in this best of seven series. 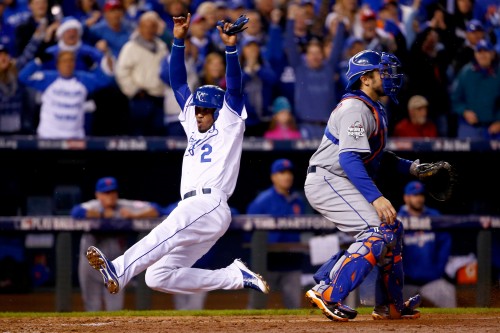 The 2015 World Series spotlight was focused on one man this time. Johnny Cueto, of the Dominican Republic, the pitcher who the Royals added via trade as the hired gun that would put them over the top in this, their second straight appearance in the Fall Classic.

The 29 year old fireballer from San Pedro de Macoris, started his career in 2008 with the Cincinnati Reds. By 2011, he had steadily moved up the depth chart, finishing 2010 at 12-7. He pitched in Game 3 of the NLDS against the Philadelphia Phillies and went five innings, giving up a lone earned run in a loss to Cole Hamels.

He was rewarded with a four year contract at $27 million dollars. However injuries kept him from claiming titles as his pitching style, similiar to Luis Tiant of the 70’s and early 80’s, continued to befuddle batters.

In 2012, Cueto went 19-9 with a 2.78 E.R.A. and pitched the opener against the San Francisco Giants in the NLDS, but eight pitches in, he strained his back. He missed his next start.

2013 was a repeat as injuries limited him to 11 starts. His performances continued to be top notch, provided he could take the mound. He was entrusted with the start against the Pirates in the Wild Card Game in Pittsburgh. He was rocked and lasted only 3.1 innings.

Cueto came into his own with his first 20 win season last year becoming the first Red pitcher to do so since Danny Jackson in 1988. He was second in the Cy Young voting.

Entering 2015, Cueto gained his 1,000th career strikeout. But in July, Johnny was traded to Kansas City and threw a shutout in his debut. However, Cueto struggled the rest of the way and it spread to the postseason where he was average in Game 2 vs the Houston Astros. But in the deciding fifth game, he rebounded, striking out eight and retiring the final 19 batters.

He continued to struggle in the ALCS as the Toronto Blue Jays roughed him up for eight runs in a third game loss. But as the 2015 World Series began, the Royals won a 14 inning thriller in the opener and needed a strong starting performance the following night. Cueto responded. He was the first AL pitcher to win a complete game in the World Series since Jack Morris in 1991.

The man who went 11-13 in 2015 and even would see his brother confused for him in the postgame, won’t be misidentified soon as he outdueled the Mets phenom Jason deGrom and held the New York outfit to one run, only two hits, with four strikeouts in a complete game gem. This win allows the Royals to take a commanding lead into CitiField tonight and allows Kansas City the luxury of only needing to win one out of three to return home with command of the series, provided they don’t clinch in New York. If so Cueto should be ready to pick up the spare and for Kansas City, their first championship since 1985.

Independence Day — More Than Just a BBQ and Fireworks