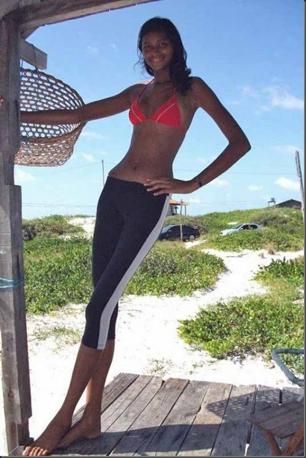 Whoa. Elisany Silva, a 14-year-old Brazilian girl, is 6-foot-9 — which makes her one of the tallest teens on the planet.

Elisany and her family say they aren’t sure why, exactly, she’s so tall, because they can’t afford to pay a doctor to investigate. But Elisany’s still shy of record-breaking territory: According to the Guinness Book of World Records, the tallest man on record is Robert Pershing Wadlow, an American who towered at 8 feet 11.1 inches. And the tallest woman ever was Zeng Jinlian of China, who was 8 feet 1.75 inches tall.

But Elisany, who told a Brazilian TV station that she wanted to be a famous fashion model, is more than a foot taller than the 5 feet 8 inches that the Association of Model Agents says is ideal. Actually, Elisany’s even taller than Amazon Eve, who at 6 feet 8 inches, claims to be the world’s tallest model. Still, there’s a good chance Elisany’s not done growing.