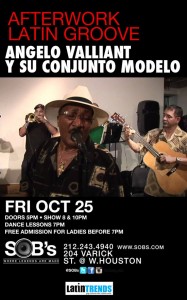 The legendary cuban salsa musician, Angelo Valliant, and his band Conjunto Modelo has been influential across the globe over the past 34 years. Born and raised in Santiago de Cuba, Angelo spread his galvanizing and infectious Cuban music to many European countries such as France, the Netherlands, Finland, Spain, and Denmark, as well as some South American countries before arriving in New York, where his live shows have been hailed as some of the best musical events in the city.

The music of Angelo Valliant y su Conjunto Modelo is an interpretation of Eastern Cuban son. The band’s discography is seven albums deep, but the most heralded release to date is the band’s definitive classic album “Soneros of Cuba in New York.”

For more info, go to www.sobs.com

ENTER FOR A CHANCE TO WIN A PAIR OF TICKETS! Just email [email protected] with your name, number & email BY 7PM TODAY and you could be seeing Angelo Valliant y su Conjunto Modelo tomorrow evening!