EVA LONGORIA, A WOMAN ON TOP!

EVA LONGORIA, A WOMAN ON TOP! 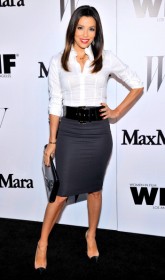 THE NETWORKS CAN’T GET ENOUGH OF EVA LONGORIA!

Eva’s Production company, UnbeliEVAble Entertainment sells another show to ABC and is working on a Latino Folklore ‘American Horror Story’ type series for NBC and much more…

Executive producer of “Devious Maids,” the multi-talented Eva Longoria and her UnbeliEVAble Entertainment production company just sold a new script to ABC about four female friends who escape the pressures and responsibilities of adult life by pretending to be in a book club.

The comedy, titled ‘Bookclub’, will be produced by Longoria and written by Patti Carr and Lara Olsen, who’ve worked together previously on ‘90210‘.

Apparently the Mexican-American actress, director and producer has several other TV projects in the works. She recently announced her plans to produce a series based upon Hispanic folklore for NBC, a Latino a la ‘American Horror Story.’

The first season circles the Mexican legend of La Llorona the “weeping woman” will follow a disturbed detective who is investigating a young mother accused of trying to drown her child. The small town in which the incident occurs is hiding a paranormal secret.

In the legend, Maria is the name of the peasant woman who drowns her children in an attempt to be with the man that she loved. The man then rejects her, and as a result she drowns herself as well. Maria cannot enter the afterlife, so she is left to search for her dead children for eternity. Maria then haunts and captures wandering children who look like her own that either misbehave or run away.

Eva’s scary TV series has been described as a supernatural thriller with a realistic tone. This anthology series is inspired by Hispanic folklore and myth. Like ‘American Horror Story’, each season is expected have a different story base exploring the different folklore myths.

But wait, she’s not done here, additionally, Longoria will produce a series called ‘Pair of Aces’ of loosely based upon the political careers of Joaquin and Julian Castro. On top of that, Eva will also star as a novela actress tackling drama on-screen and off in a new NBC project, ‘Telenovela’.

Abandoning Your Comfort Zone Will Make You A Better Traveler
November Elections 2014: Latinos in U.S. House expected to increase!
Translate »
%d bloggers like this: