@Evalongoria Produces, Directs and Stars in Short Film “Out of the Blue”

@Evalongoria Produces, Directs and Stars in Short Film “Out of the Blue” 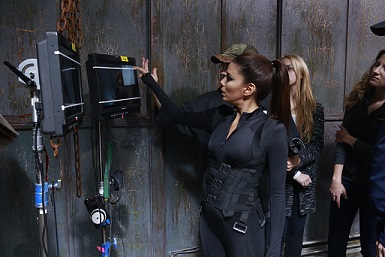 If acting, producing, philanthropy, and entrepreneurship weren’t enough Latin actress Eva Longoria has added directing to her repertoire. Longoria partnered with Canon and Ron Howard to direct a short film based on ten user generated photographs as part of Canon’s “Project Imaginat10n”, which is the first film festival in history where consumer photographs inspire Hollywood films. Eva’s film will premiere this Fall in NYC to kick off Canon’s “Project Imaginat10n” Film Festival. Eva said of the project “This project is genius—linking people I personally admire with the limitless untapped creativity in everyone.”

“Out of the Blue” is the story of a tough, sexy woman fighting her way through a series of unique physical challenges to stop a mad man. The female character’s mission takes a surprising turn that leaves us wondering if it was all just a game. The film title is also the title of the winning photograph she selected in the Mood category. Ron Howard selected the photograph “Discovering limits” in the Discovery theme which must be used as inspiration in all films; at first, the photograph was a challenge to work into the script and the story has greatly evolved since Ron picked the Discovery photo. “Out of the Blue” was written by Robert Leddy Jr. and Wendy West and produced by Freestyle Productions. The film was shot using the Canon C500 and co-stars Amaurey Nolasco (of Prison Break) as the villain.

You can view the video of the photos chosen by Eva Longoria that inspired her film in Project Imaginat10n at http://www.youtube.com/watch?v=o3nF7gLJMiU