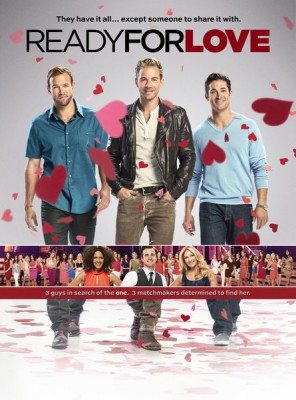 I’ll admit I was one of the few 3.2 million viewers (and maybe even tried out) for Eva Longoria’s matchmaking show “Ready For Love.” The show was Executive produced by Eva Longoria and hosted by Bill and Giuliana Rancic and followed three bachelors Ben Patton, Tim Lopez, Ernesto Arguello with 36 women competing for their love. The potential mates were chosen for the bachelors by expert matchmakers.

NBC will be replacing “Ready for Love” with “Grimm” Tuesdays at 10/9c beginning April 30 through May 21st. According to the network, NBC has not decided when or where “Ready for Love” will air its remaining episodes. The dating show debuted earlier this month to disappointing ratings; its premiere only nabbed 3.8 million viewers and a 1.6 rating in the 18-49 demo.

While promoting the show she executive-produced, Longoria said, “I think people will take away inspiration, motivation to find their match, [and] the hopeless romantic in themselves to go out and find their compatible one.”

I’ll miss the show. Will you?

Time Warner Cable (@TWC) Announces “Stem in Sports” Campaign in Support of the President’s Call to Action on Stem Education
2013 NBA Playoffs: Knicks up 2-0 on Celtics