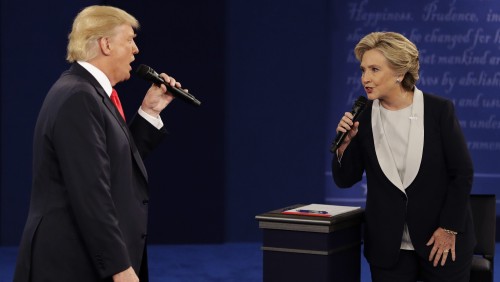 The second of the three presidential debates took place on Sunday, Oct 9th, in Washington University at St. Louis, MO, and was orchestrated to that of a town hall: two moderators, Anderson Cooper of CNN and Martha Raddatz of ABC, a small live audience, and the candidates were able to walk about a little as they spoke. The two took questions from the audience, as well as voters via social media (primarily Facebook) that each moderate read aloud, and from the moderators themselves. Each candidate had two minutes to respond to the main questions and about a minute for any follow-ups, to which is no surprise that neither of them kept, and even talking over one another (mostly Trump). It is also to no surprise that each of their past scandals was brought it, either with a voter’s question, indirectly or very indirectly, answering said question or countering a response. Cooper himself brought up the headline of a leaked video of Trump from 2005, having a very lewd conversation about sexually harassing and assaulting women, and with all the other things he’s said about women, it seems to be a new low for Trump. Of course, he denied ever saying such things.

The topics are one way or another on every American’s mind: healthcare, national security, ISIS & Syria, the rich abusing tax loopholes, immigration, jobs in the coal industry, and the Supreme Court.

Clinton says that the Affordable Care Act (a.k.a. Obamacare) should be fixed up but not appealed altogether while Trump wants to get rid of it to start fresh, calling it a “disaster” (as he does with everything else he doesn’t like), and stated that he would allow the insurance companies to be competitive with one another, adding that these companies would have “plans that are so good”, they’ll even accept applicants with pre-existing conditions because of this competition – capitalism on our health, eh?

A Muslim woman in the audience made her concerns known regarding Trump’s comments about his “Muslim ban” into the country, along with immigrants overall. He was, of course, still vague about this, as if there wasn’t already a rigorous vetting process for refugees, who, according to WhiteHouse.gov, have the toughest vetting process than anyone else looking to immigrate to the United States. Clinton reminded viewers that the country was founded on freedom of religion, and everyone needs to feel welcomed. Though she somewhat agreed with having a tough vetting process, she had one of those “think of the children” stances regarding the refugee crisis. Circling back to Trump’s previous comments on “deportation squads”, she told a brief story of a 10-year-old boy who was adopted from Ethiopia as a toddler, where he asked his mother if a would-be president Trump was going to send him back.

As an American, it’s joked that taxes are one of two things guaranteed in life – unless you’re Donald Trump.  When questioned about tax loopholes that are being exploited by the rich, Trump had some pretty dicey information to dole out: he’s “paid hundreds of millions” in taxes, which just adds to him being quite the mentiroso since a handful of his tax records have been made public, showing he hasn’t paid federal income tax in nearly 20 years. He also claimed that he’ll bring the tax rate down from 35% to 15%, cutting them down for the middle class, and claiming, almost in the same sentence, that the US has “just about the highest [taxes] in the world.” A question like this was asked since this subject was trending for the first time on Facebook during the campaign.

Something Positive About The Other?

Both Clinton and Trump were asked by an audience member what was one trait they respected about the other candidate. Clinton respects the Trump offspring, Donald Jr, Eric, and Ivanka, for their efforts in assisting their father and Trump respects that Clinton is a “fighter” and that she “doesn’t quit.”