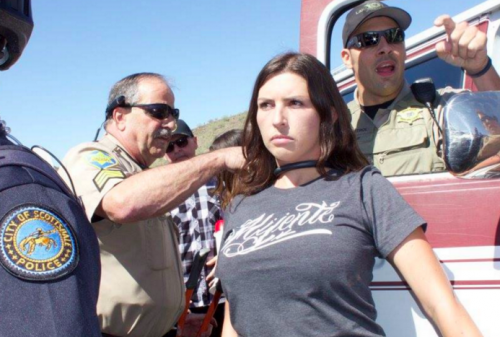 Donald Trump continues to be the face of what it looks like to be a racist in this country. Since beginning his campaign, Trump has shined a light on the rising racial issues that have gone ignored in this country. It’s not surprising how the today is eerily becoming more and more like the America of yesteryear when it comes to not only Black civilians but Latino civilians as well.

For the last two years or so the country’s recent racial tension between law enforcement and the non-White civilians who they are sworn to protect has continued to rise unchecked, and now thanks to one billionaire entrepreneur we are currently facing the point of no return.

This past weekend in Phoenix, Arizona, Donald Trump led a rally for his supporters and as usual the rally prompted protestors to take action by shutting down a major highway which block Trump supporters from attending the event for several hours.

This protest occurred on Saturday, and resulted in the arrest of several individuals who could no longer continue to sit idly by and allow the hateful anti-immigrant or anti-Latino rhetoric of Trump continue in a state which already has a known history of being systemically racist towards its Latino community.

But amongst all the arrests, Jacinta Gonzalez, an activist who works for an immigrant rights organization called Mijente, experienced firsthand what the people she is fighting for deal with almost every day and what it is like being Latino within a state where that can lead to troubling experience.

After being removed of the U-lock she had placed around her neck to lock herself to a truck that blocked the highway, Gonzalez and several other protestors were taken into police custody by the Maricopa County Sheriff’s department. While all of the other protestors were processed and released merely a few hours later, Gonzalez was not.

Instead, Gonzalez was held overnight and transferred to an Immigration and Customs Enforcement—also so known as ICE—detention center and was questioned for hours about her immigration status.

Gonzalez is in fact a U.S. citizen, but being Latino with a Latino surname was racially profiled.

“As a Latina with a Latina surname, I was the only person interviewed by ICE, and they placed an immigration detainer against me,” said Gonzalez, describing her arrest in an interview.

Despite being continually questioned by law enforcement, Gonzalez refused to answer any questions about her citizenship and would simply respond: “I’m invoking my constitutional right to remain silent and I want an attorney present.”

Gonzalez goes on to describe that while her white colleagues were released the day of their arrest, she remained in jail for being both Latino and as a repercussion for invoking her basic civil rights for a Class 3 misdemeanor which is a non-violent offense.

“Because I asserted by civil rights, I was retaliated against. I’m a fierce believer in the Constitution, and I don’t believe they have the right to interview people without a lawyer present. It’s extremely alarming, and it even violates ICE’s own policy. They are not supposed to put an immigration hold on people convicted of non-violent offenses.”

The situation for Gonzalez ended on Sunday morning. Gonzalez was finally released on Sunday morning, but only after she was handcuffed, shackled, placed into a van and transported to an ICE field office where while there her citizenship was proven. At the field office, it was during Gonzalez’s fingerprinting process where enforcement agents realized she was a U.S. citizen.

Gonzalez believes her fingerprints matched her U.S. passport which contained that information which could have been done the moment she was brought into the sheriff’s department.

Detective Doug Matteson of the Maricopa County Sheriff’s Office confirmed to news sources that Gonzalez was in-fact charged with for blocking the highway and refusing to disperse, however he denies the allegation that Gonzales was targeted by immigration agents.

“Everyone that enters Maricopa County Jail, whether it’s for spitting on the sidewalk or for murder, you are seen by ICE,” said the Detective, “They interview everyone—male, female, black, white—and for some reason they put a hold on her. They always operate in our jail facility. It’s not like she was singled out.”

The detective’s excuse regarding Gonzalez’s detainment is quite questionable. Recent court documents have found that the Maricopa County Sheriff department along with its sheriff Joe Arpaio have been engaging in systemic racial profiling when it comes to Latino civilians; a finding that isn’t all that surprising. Arpaio and the department has started to make reforms only after residents of the county filed class action lawsuit due to the racist encounters with the department.

Since making his announcement that he was running to become our 45th President, Trump has been attaining a surmounting support from Americans who have accepted his largely ignorant, chauvinistic, and racist ideology. Trump has taken this country’s ongoing problem with racial issues and used them in a negative way which has created a disastrous preview of what awaits us if he does somehow manage to become elected as our next president.

Gonzalez says it best, “The profiling I experienced shows what Trump is trying to promote. We are really alarmed not only by Trump’s campaign but the space he’s opened up for other people to spew hatred and implement racist policies.”