This Christmas Warner Bros. Pictures presents the comedy “Grudge Match” with film legends Sylvester Stallone and Robert De Niro. In the film De Niro and Stallone play Billy “The Kid” McDonnen and Henry “Razor” Sharp, two local Pittsburgh fighters whose fierce rivalry put them in the national spotlight. Thirty years later, boxing promoter Dante Slate, Jr., played by Kevin Hart (“Think Like A Man”) makes them an offer they can’t refuse: to re-enter the ring and settle the score once and for all.

Hart says of the opportunity to work with the cast, “I got to work with people in the business a long time who all have successful careers. For me it was just about sitting back seeing how they work and appreciating how they approach their craft. It was a dream come true.”

“No one wants to see another boxing film especially when you’re approaching 160 years old,” joked Stallone. “Then Robert called me and talked a lot about it.”

Oscar winner Alan Arkin plays Razor’s former trainer and friend, Louis “Lightning” Conlon who is in a nursing home at first then leaves to train Razor. 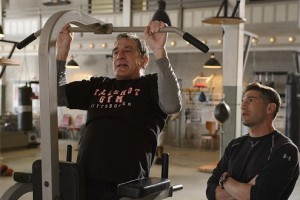 Both Stallone and De Niro trained very hard for the film. “We had a trainer who has worked with Sylvester, Rob Sale, he was a big big help,” stated De Niro who lost 20 lbs while getting in shape.

The film’s director and producer Peter Segal (“Get Smart”) says “What attracted these guys to it was obviously was we’re winking at their iconography. I’m always attracted to stories that straddle the line between comedy and drama. I knew that this was obviously going to be a funny movie but i also knew the fight had to be taken very seriously for this thing to work. And there are really only two people that could do that.”