Hold Up, ‘Back It Up’, Prince Royce Has Another Hit Song

Hold Up, ‘Back It Up’, Prince Royce Has Another Hit Song 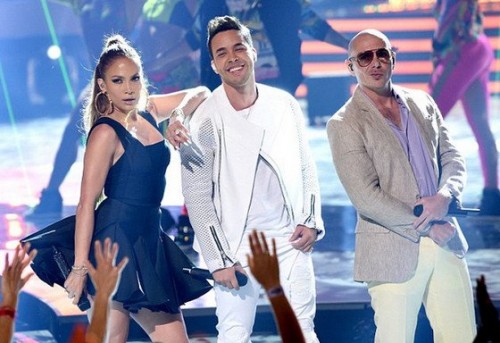 American Idol performance by Prince Royce with J.Lo and Pitbull

I guess now we can call the song, “Back It Up”, by Latin-pop sensation Prince Royce as a chart topping hit now that it has debut on the Billboard’s Hot Latin Song chart.

Royce’s new Spanish version of his song, “Back It Up”, featuring Pitbull and Jennifer Lopez enters at No. 27 on the charts. Part of the song’s success could be attributed to the recent performance at Fox’s American Idol season finale where all three wowed the crowd and J.Lo sung her Spanish verse with a sexy breathy style.

The chart’s rating is based on digital sales, streaming data and the airplay the songs get from radio station (in this case it is Latin stations). Both versions of Royce’s song had a total sales of “23,000 downloads during the week ending May 17 (a 201 percent increase), with 29 percent of overall sales attributed to the newly released Spanish version,” reports the music website Billboard.

Even though the Bronx-born bachata star’s English version of his latest single hasn’t seen itself on the charts, Royce’s other singles have been experiencing a lot of success as he continues to be on the road to becoming a crossover king. Or prince. Prince Crossover… maybe.

The prince of bachata – who recently celebrated his 26th birthday – has successfully released “Stuck on a Feeling” featuring Snoop Dogg, which the support of excited fans pushed that single to reach No. 17 on the Mainstream Top 40 charts. Royce’s other song, “My Angel”, was one of the hot singles that pushed the “Furious 7’ soundtrack to dominate the charts for more than three months.

If Royce keeps going like this he might find himself in the same name bracket of other successful Latin artists that crossed over like Ricky Martin, Enrique Iglesia and Gloria Estefan.